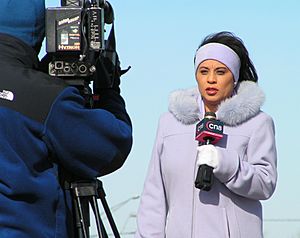 A television reporter holding a microphone.

A journalist is a person who works in journalism to report the news. They may work on their own ("freelance") or for a newspaper, a radio or television programme. There are different kinds of journalists.

However, frequently news does show bias. 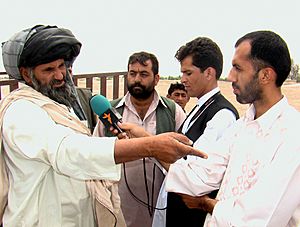 A reporter for Radio Azadi interviews a citizen in Afghanistan 2009

Journalists sometimes expose themselves to danger, especially when reporting in areas of armed conflict or in places that do not respect the freedom of the press. Organizations such as Reporters Without Borders publish reports on press freedom and advocate for press freedom. The Committee to Protect Journalists has reported that as of 1 December 2010, 145 journalists were imprisoned around the world for reporting the news. Current numbers are even higher. The ten countries with the most journalists currently imprisoned are Turkey (95), China (34), Iran (34), Eritrea (17), Burma (13), Uzbekistan (six), Vietnam (five), Cuba (four), Ethiopia (four), and Sudan (three).

There are many different types of jobs in journalism. 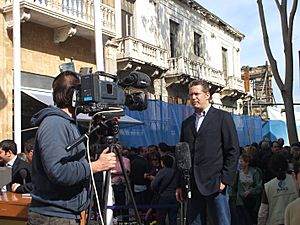 A correspondent reporting for German news about the conflict in Cyprus

All content from Kiddle encyclopedia articles (including the article images and facts) can be freely used under Attribution-ShareAlike license, unless stated otherwise. Cite this article:
Journalist Facts for Kids. Kiddle Encyclopedia.