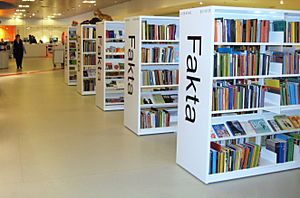 You can search for facts in a library

A fact is a statement that is real or true, or a thing that can be shown to be real or true.

A fact is something that has really happened or is actually the case. The usual test for a statement of fact is whether it can be seen to be true. Standard reference works are often used to check facts. Scientific facts are verified by careful observation or measurement (by experiments or other means).

A fact is a "statement" (what a person says) about something that is true. A fact can answer questions like, "what color is it?" or "who made that?"

One very good way to learn a fact is if a person can help you see it. For example, if you ask, "do you have my book?" To answer this question, a person can let you see your book. Then you can know it is a fact that this person has your book.

All content from Kiddle encyclopedia articles (including the article images and facts) can be freely used under Attribution-ShareAlike license, unless stated otherwise. Cite this article:
Fact Facts for Kids. Kiddle Encyclopedia.