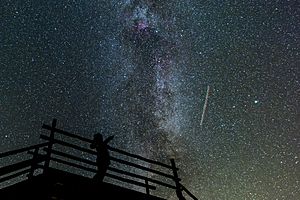 Observer is someone who gathers information about observed phenomenon, but does not intervene. Observing the air traffic in Rõuge, Estonia.

Observation is an activity of an intelligent living being (e.g. human), which senses and assimilates the knowledge of a phenomenon in its framework of previous knowledge and ideas.

Observation is more than the bare act of observing: To perform observation, a being must observe and seek to add to its knowledge.

Observations that come from self-defining instruments are often unreliable. Such observations are hard to reproduce because they may vary even with respect to the same stimuli. Thus they are not of much use in exact sciences like physics which require instruments which do not define themselves. It is thus often necessary to use various engineered instruments like: spectrometers, oscilloscopes, cameras, telescopes, interferometers, tape recorders, thermometers etc. and tools like clocks, scale that help in improving the accuracy, quality and utility of the information obtained from an observation.

The accuracy and tremendous success of science is primarily attributed to the accuracy and objectivity (i.e. repeatability) of observation of the reality that science explores.

The role of observation in the scientific method

Scientific method refers to techniques for investigating phenomena, acquiring new knowledge, or correcting and integrating previous knowledge. To be termed scientific, a method of inquiry must be based on gathering observable, empirical and measurable evidence subject to specific principles of reasoning. A scientific method consists of the collection of data through observation and experimentation, and the formulation and testing of hypotheses.

Although procedures vary from one field of inquiry to another, identifiable features distinguish scientific inquiry from other methodologies of knowledge. Scientific researchers propose hypotheses as explanations of phenomena, and design experimental studies to test these hypotheses. These steps must be repeatable in order to dependably predict any future results. Theories that encompass wider domains of inquiry may bind many hypotheses together in a coherent structure. This in turn may help form new hypotheses or place groups of hypotheses into context.

Among other facets shared by the various fields of inquiry is the conviction that the process be objective to reduce a biased interpretation of the results. Another basic expectation is to document, archive and share all data and methodology so they are available for careful scrutiny by other scientists, thereby allowing other researchers the opportunity to verify results by attempting to reproduce them. This practice, called full disclosure, also allows statistical measures of the reliability of these data to be established.

All content from Kiddle encyclopedia articles (including the article images and facts) can be freely used under Attribution-ShareAlike license, unless stated otherwise. Cite this article:
Observation Facts for Kids. Kiddle Encyclopedia.