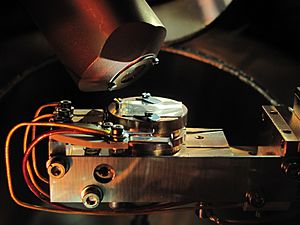 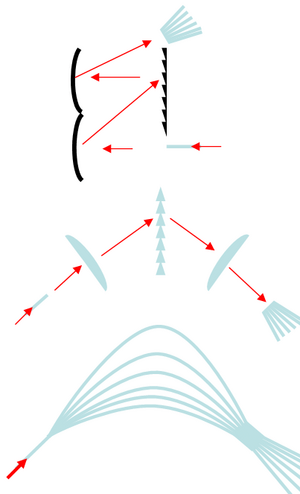 A spectrometer is an optical instrument used to measure properties of light over a specific portion of the electromagnetic spectrum.

The independent variable is usually the wavelength of the light. The variable measured is most often the light's intensity but could also, for instance, be the polarization state. A spectrometer is used in spectroscopy for producing spectral lines and measuring their wavelengths and intensities. Spectrometer is a term that is applied to instruments that operate over a very wide range of wavelengths, from gamma rays and X-rays into the far infrared.

In general, any particular instrument will operate over a small portion of this total range because of the different techniques used to measure different portions of the spectrum. Below optical frequencies (that is, at microwave, radio, and audio frequencies), the spectrum analyzer is a closely related electronic device.

Spectrometers are used in spectroscopic analysis to identify materials. Spectroscopes are used often in astronomy and some branches of chemistry. Early spectroscopes were simply a prism with graduations marking wavelengths of light. Modern spectroscopes, such as monochromators, generally use a diffraction grating, a movable slit, and some kind of photodetector, all automated and controlled by a computer. The spectroscope was invented by Gustav Robert Georg Kirchhoff and Robert Wilhelm Bunsen.

All content from Kiddle encyclopedia articles (including the article images and facts) can be freely used under Attribution-ShareAlike license, unless stated otherwise. Cite this article:
Spectrometer Facts for Kids. Kiddle Encyclopedia.