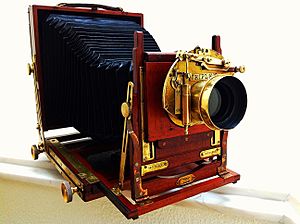 A camera that takes one picture at a time is sometimes called a still camera. A camera that can take pictures that seem to move is called a movie camera. If it can take videos it is called a video camera or a camcorder. The majority of cameras are on a phone. This is called a "Camera phone".

All cameras are basically a box that light can not get into until a photo is taken. There is a hole on one side of the camera where the light can get in through the lens, and this is called the aperture. On the other side is a special material that can record the image that comes through the aperture. This material is the film in a film camera or electronic sensor in a digital camera. Finally, there is also the shutter, which stops light from getting in until a photo is taken.

When a photo is taken, the shutter moves out of the way. This lets light come in through the aperture and make a picture on the film or electronic sensor. In many cameras, the size of the aperture can be changed to let in more light or less light. The amount of time that the shutter lets light through can be changed as well. This also lets in more light or less light. Most of the time, electronics inside the camera control these, but in some cameras the person taking the picture can change them as well.

A ciné camera or movie camera takes a rapid sequence of photographs on image sensor or strips of photographic film. Unlike a still camera the ciné camera takes a series of images, each one is called a "frame". The frames are later played back in a ciné projector at a specific speed, called the "frame rate" (number of frames per second). While viewing, human visual system merges the separate pictures to create the illusion of motion. The first ciné camera was built around 1888. By 1890 several types were being made. The standard film size for ciné cameras was quickly established as 35mm film. This remained in use until transition to digital cinematography. 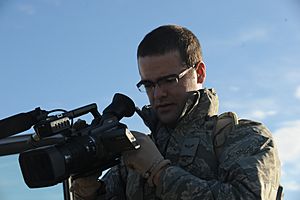 All content from Kiddle encyclopedia articles (including the article images and facts) can be freely used under Attribution-ShareAlike license, unless stated otherwise. Cite this article:
Camera Facts for Kids. Kiddle Encyclopedia.