135 film. The film is 35 mm wide. Each image is 36x24 mm in the most common "full-frame" format (sometimes called "double-frame" for its relationship to the "single frame" 35 mm movie format). 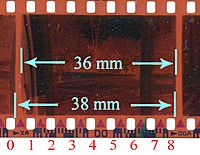 135 film is the official name of the photographic film that is most used today. It is specified by ISO Standard 1007. It was introduced by Kodak in 1934 It was made for making pictures, rather than films. It is 35mm wide; that is why it is often also called 35mm film.

It quickly grew in popularity. It became more popular than 120 film by the late 1960s. Since then, it has been the most popular photographic film format. Despite competition from formats such as 828, 126, 110 and APS, it remains so today.

Individual rolls of 135 film are enclosed in single-spool, light-tight, metal cassettes. This allows cameras to be loaded in daylight. The film is clipped or taped to a spool and exits via a velvet-covered slot. The end of the film is cut on one side to form a leader, which is to be inserted into a corresponding slot in the camera take-up spool. It has the same dimensions and perforation pitch as 35 mm movie print film.

All content from Kiddle encyclopedia articles (including the article images and facts) can be freely used under Attribution-ShareAlike license, unless stated otherwise. Cite this article:
135 film Facts for Kids. Kiddle Encyclopedia.