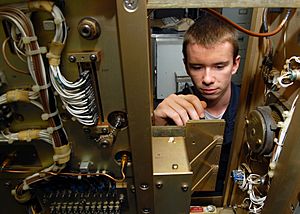 Electronics is the study and use of electrical parts and circuits. These "electronic components" control electricity for useful purposes.

Older devices used glass or metal vacuum tubes to control the flow of electricity. With these components a low power voltage can be used to change another, and that's why they are useful in amplifiers and switches.

By the late 1960's and early 1970's the transistor and semiconductor began replacing vacuum tubes. Transistors can be made much smaller than vacuum tubes and they can work using less energy.

At about the same time, integrated circuits (circuits that have a large numbers of very small transistors placed on very thin slices of silicon) became commonly used. Integrated circuits made it possible to reduce the number of parts needed to make electronic products and made the products much cheaper in general.

People interested in physics study how and why these electronic components work, and in addition they discover, invent, or improve them.

People who design, construct and maintain electronic components and circuits are called electrical engineers. They work in electrical, electronics and computer engineering .

One way of looking at an electronic system is to separate it into three parts:

A television set, for example, has as its input a broadcast signal received from an antenna, or for cable television, a cable.

Pulse circuits are used for signals that require rapid pulses of energy. For example, aircraft and ground radar equipment work by using pulse circuits to create and send high powered bursts of radio energy from radar transmitters. Special antennas (called "beam" or "dish" antennas because of their shape) are used to send ("transmit") the high powered bursts in the direction the beam or dish antenna is pointed.

The radar transmitter's pulses or bursts of radio energy hit and bounce back (they are "reflected") from hard and metallic objects. Hard objects are things like buildings, hills, and mountains. Metallic objects are anything made of metal, like aircraft, bridges, or even objects in space, like satellites. The reflected radar energy is detected by radar pulse receivers which use both pulse and digital circuits together. The pulse and digital circuits in radar pulse receivers are used to show the location and distance of objects which have reflected the radar transmitter's high powered pulses.

By controlling how often the rapid pulses of radar energy are sent out by a radar transmitter (called the transmitter's "pulse timing"), and how long it takes for the reflected pulse energy to come back to the radar receiver, one can tell not only where objects are, but also how far away they are. Digital circuits in a radar receiver calculate the distance to an object by knowing the time interval between energy pulses. The radar receiver's digital circuits count how long it takes between pulses for an object's reflected energy to be detected by the radar receiver. Since radar pulses are sent and received at approximately the speed of light, the distance to an object can easily be calculated. This is done in digital circuits by multiplying the speed of light by the time it takes to receive the radar energy reflected back from an object.

The time between pulses (often called "pulse rate time", or PRT) sets the limit on how far away an object can be detected. That distance is called the "range" of a radar transmitter and receiver. Radar transmitters and receivers use long PRT's to find the distance to objects that are far away. Long PRT's makes it possible to accurately determine the distance to the moon, for example. Fast PRT's are used to detect objects that are much closer, like ships at sea, high flying aircraft, or to determine the speed of fast moving automobiles on highways. 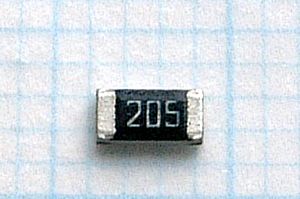 Digital circuits are used for signals that repeatedly turn on and off.

Computers and electronic clocks are examples of electronic devices that are made up of mostly digital circuits.

All content from Kiddle encyclopedia articles (including the article images and facts) can be freely used under Attribution-ShareAlike license, unless stated otherwise. Cite this article:
Electronics Facts for Kids. Kiddle Encyclopedia.