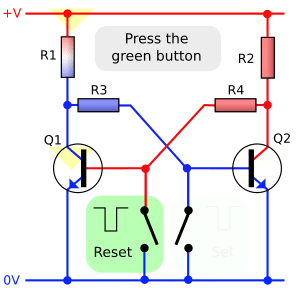 For the type of shoes (sandals), see Flip-flop

In electronics, a flip-flop or latch is a circuit that has two stable states and can be used to store information. Signals applied to control inputs can change the circuit’s state. It is the basic storage element in sequential logic. Flip-flops and latches are fundamental building blocks of digital electronics systems used in computers, communications, and many other types of systems.

Flip-flops are mainly used as static RAM to store data in a computer. That data is represented in binary. Binary is represented in a 1 (“high state”) and 0 (“low state”). The structure of flip flops vary, but the general characteristic is that two branches affect each other's state by putting the current resulting state of one branch and using that as input for the next iteration of the other branch.

An example of a flip-flop. This particular one is a SR latch.

The first electronic flip-flop, originally called the Eccles-Jordan trigger circuit, was invented in 1918 by the British physicists William Eccles and F. W. Jordan. The initial design’s only active elements were two vacuum tubes. While working at Hughes Aircraft, Eldred Nelson coined the term JK for a flip-flop which changed states when both inputs were on (a logical "one").

The most fundamental flip-flop is the simple SR flip-flop. In the SR flip-flop, the S and R stand for set and reset. The stored bit is present on the output marked Q.

Since high and low mean logical '1' and '0', respectively, the SR flip-flop can have four combinations showing below:

The restricted combination (D) leads to an unstable state.

A D Flip-Flop prevents an SR flip-flop from receiving the forbidden combination. It takes only one input for data, called D. It splits this data down two paths. On one path it flips the data to the opposite value. This is the “NOT” box in the animation. That way, S = 1, R = 1 is never fed to the internal SR latch.

All content from Kiddle encyclopedia articles (including the article images and facts) can be freely used under Attribution-ShareAlike license, unless stated otherwise. Cite this article:
Flip-flop (electronics) Facts for Kids. Kiddle Encyclopedia.