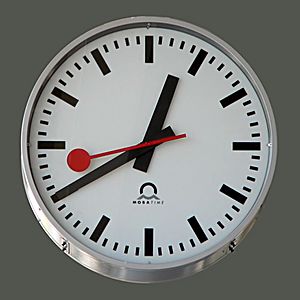 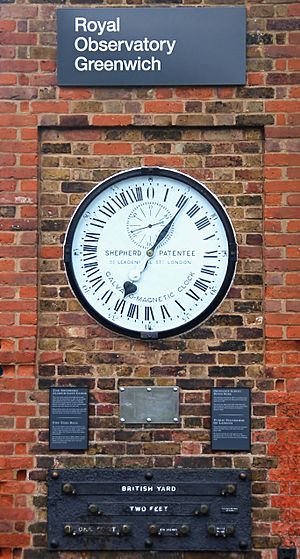 The Shepherd Gate Clock at the Royal Observatory, Greenwich.

A clock is an instrument to measure, keep, and indicate time. In general usage today, a "clock" refers to any device for measuring and displaying the time. Watches and other timepieces that can be carried on one's person are often distinguished from clocks.

The clock is one of the oldest human inventions, meeting the need to consistently measure intervals of time shorter than the natural units: the day, the lunar month, and the year. Devices operating on several physical processes have been used over the millennia. A sundial shows the time by displaying the position of a shadow on a flat surface. There is a range of duration timers, a well-known example being the hourglass. Water clocks, along with the sundials, are possibly the oldest time-measuring instruments.

The apparent position of the Sun in the sky moves over the course of a day, reflecting the rotation of the Earth. Shadows cast by stationary objects move correspondingly, so their positions can be used to indicate the time of day. A sundial shows the time by displaying the position of a shadow on a (usually) flat surface, which has markings that correspond to the hours. Sundials were widely used in ancient times.

The flow of sand in an hourglass can be used to keep track of elapsed time.

Many devices can be used to mark passage of time without respect to reference time (time of day, minutes, etc.) and can be useful for measuring duration and/or intervals. Examples of such duration timers are, candle clocks and the hourglass. 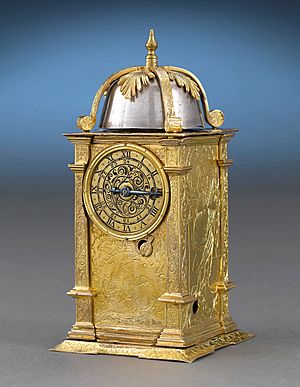 Clock-makers developed their art in various ways. Building smaller clocks was a technical challenge, as was improving accuracy and reliability. Clocks could be impressive showpieces to demonstrate skilled craftsmanship, or less expensive, mass-produced items for domestic use.

Digital clocks work by measuring the vibrations of quartz crystals when charged with electricity. The vibration frequency of the crystal does not change.

Atomic clocks use the electromagnetic waves absorbed and emitted by atoms such as caesium to measure time. They are the most precise clocks in the world. 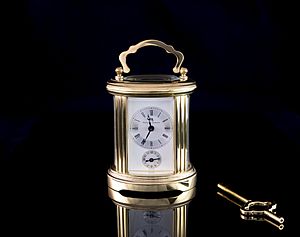 There are many types of clocks and watches. The two most common types of displays on clocks are "analog" and "digital" .

Analog clocks use angles to tell time. They have hands that rotate around the clock's face. The position of the hands shows the time. The face of the clock is a flat disk. It will often have the numbers one through twelve on the face to make it easier to read. Analog clocks commonly have two or three hands. If it has two, there is a large hand or minute hand and a smaller hand, the hour hand. Clocks with three hands also have a second hand. This hand is usually about as long as the minute hand, but much thinner. 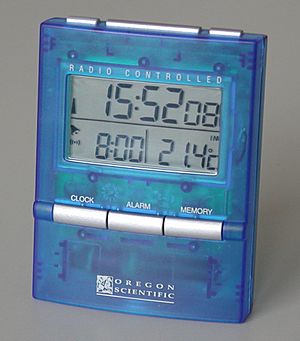 There are also clocks that use sound, usually along with a dial or some other means, to show the time. The sound could be as simple as a bell or so complex that it sounds the same as a person. Many clocks that do this are old and are driven by springs or weights rather than batteries or other forms of electric power. Some special clocks are often used by people who are blind or cannot see well enough to read an analog or digital clock. They can also be used by people with mental problems that cause them to be unable to read other clocks.

A lot about clocks

There are many different types of clocks and watches. They are different in what they are used for, what they can do or how they are made. Examples include: 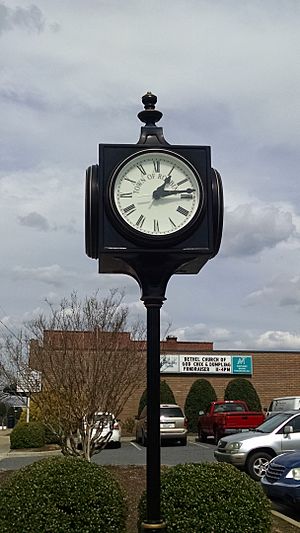 Many cities and towns traditionally have public clocks in a prominent location, such as a town square or city center. This one is on display at the center of the town of Robbins, North Carolina.

Clocks are in homes, offices and many other places; smaller ones (watches) are carried on the wrist or in a pocket; larger ones are in public places, e.g. a railway station or church. A small clock is often shown in a corner of computer displays, mobile phones and many MP3 players.

The primary purpose of a clock is to display the time. Clocks may also have the facility to make a loud alert signal at a specified time, typically to waken a sleeper at a preset time; they are referred to as alarm clocks. The alarm may start at a low volume and become louder, or have the facility to be switched off for a few minutes then resume. Alarm clocks with visible indicators are sometimes used to indicate to children too young to read the time that the time for sleep has finished; they are sometimes called training clocks. 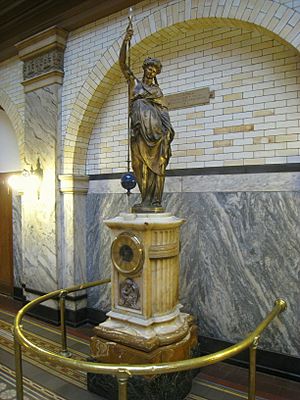 All content from Kiddle encyclopedia articles (including the article images and facts) can be freely used under Attribution-ShareAlike license, unless stated otherwise. Cite this article:
Clock Facts for Kids. Kiddle Encyclopedia.