8-day longcase clock. Clock dates back to 1700 and the case to late 19th – early 20th century CE. Original dial of this clock has been replaced by a brass dial with Tamil numerals perhaps during the late 19th or early 20th century CE. Original long-case was also replaced by a mandapa-shaped wooden carved case done in South Indian style. The front and the side panels are done in metal repoussé work with floral meanders. Lower part of the case depicts mythological scenes and the case was manufactured at the Madras School of Arts. Clock on display in The Prince of Wales Museum in Mumbai and was donated by Dorab Tata.

A grandfather clock (also a longcase clock, tall-case clock, grandfather's clock, or floor clock) is a tall, freestanding, weight-driven pendulum clock with the pendulum held inside the tower or waist of the case. Clocks of this style are commonly 1.8–2.4 metres (6–8 feet) tall. The case often features elaborately carved ornamentation on the hood (or bonnet), which surrounds and frames the dial, or clock face.

The English clockmaker William Clement is credited with the development of this form in 1670. Until the early 20th century, pendulum clocks were the world's most accurate timekeeping technology, and longcase clocks, due to their superior accuracy, served as time standards for households and businesses. Today they are kept mainly for their decorative and antique value, being widely replaced by both analog and digital timekeeping. 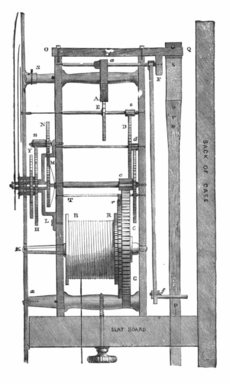 The advent of the longcase clock is due to the invention of the anchor escapement mechanism by Robert Hooke around 1658. Prior to that, pendulum clock movements used an older verge escapement mechanism, which required very wide pendulum swings of about 80–100°. Long pendulums with such wide swings could not be fitted within a case, so most freestanding clocks had short pendulums. 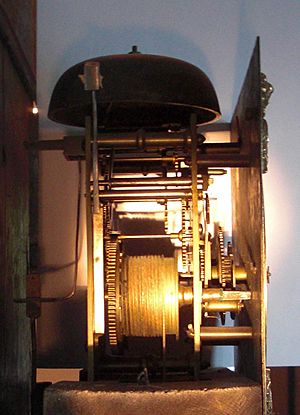 Lateral view of a Timothy Mason longcase clock movement with striking mechanism, circa 1730

The anchor mechanism reduced the pendulum's swing to around 4° to 6°, allowing clockmakers to use longer pendulums, which had slower "beats". These consumed less power allowing clocks to run longer between windings, caused less friction and wear in the movement, and were more accurate. Almost all longcase clocks use a seconds pendulum (also called a "Royal" pendulum) meaning that each swing (or half-period) takes one second. These are about a metre (39 inches) long (to the centre of the bob), requiring a long narrow case. The long narrow case actually predated the anchor clock by a few decades, appearing in clocks in 1660 to allow a long drop for the powering weights. However, once the seconds pendulum began to be used, this long weight case proved perfect to house it as well. British clockmaker William Clement, who disputed credit for the anchor escapement with Robert Hooke, produced the first longcase clocks around 1680. Within the year Thomas Tompion, the most prominent British clockmaker, was making them too.

Modern longcase clocks use a more accurate variation of the anchor escapement called the deadbeat escapement.

Most of a longcase clock's height is used to hold the long pendulum and weights. The two chains attached to the weights and the lack of winding holes in the dial show this to be a 30-hour clock.

Traditionally, longcase clocks were made with two types of movement: eight-day and one-day (30-hour) movements. A clock with an eight-day movement required winding only once a week, while generally less expensive 30-hour clocks had to be wound every day. Eight-day clocks are often driven by two weights – one driving the pendulum and the other the striking mechanism, which usually consisted of a bell or chimes. Such movements usually have two keyholes, one on each side of the dial to wind each one. By contrast, 30-hour clocks often had a single weight to drive both the timekeeping and striking mechanisms. Some 30-hour clocks were made with false keyholes, for customers who wished that guests to their home would think that the household was able to afford the more expensive eight-day clock. All modern striking longcase clocks have eight-day movements. Most longcase clocks are cable-driven, meaning that the weights are suspended by cables. If the cable were attached directly to the weight, the load would cause rotation and untwist the cable strands, so the cable wraps around a pulley mounted to the top of each weight. The mechanical advantage of this arrangement also doubles the running time allowed by a given weight drop.

Origin of the term "grandfather clock"

Longcase clock circa 1730 by Timothy Mason (clockmaker) of Gainsborough, Lincolnshire.

The Oxford English Dictionary states that the popular 1876 song My Grandfather's Clock is responsible for the common name "grandfather clock" being applied to the longcase clock.

The song was composed by an American songwriter by the name of Henry Clay Work who discovered a long grandfather clock in The George Hotel in Piercebridge, in County Durham in England. When he asked about the clock, he was informed that it had two owners. After the first owner died the clock became inaccurate and when the second owner died, the clock stopped working altogether. The story inspired Henry to create the song.

Grandfather clocks are of a certain height. There are also "grandmother" and "granddaughter" clocks, which are slightly shorter in height.

Comtoise clocks, also known as Morbier clocks or Morez clocks, are a style of longcase clock made in the French region Franche-Comté (hence their name). Features distinguishing this style are a curving "potbellied" case and a greater use of curved lines. Often a heavy, elongated, highly ornamented pendulum bob extends up the case (see photo).

Production of these clocks began in 1680 and continued for a period of about 230 years. During the peak production years (1850–1890) over 60,000 clocks were made each year. These clocks were very popular across the generations; they kept the time on farms throughout France. Many Comtoise clocks can be found in France but they are also frequently found in Spain, Germany, and other parts of Europe, less in the United States. Many Comtoise clocks were also exported to other countries in Europe and even further, to the Ottoman Empire and as far as Thailand. The metal mechanism was usually protected by a wooden sheath.

Bornholm clock made by Edvart Sonne, from Rønne, Bornholm in the late 1700s

Bornholm clocks are Danish longcase clocks and were made on Bornholm from 1745 to 1900. In Sweden a special variety of longcase clocks was made in Mora, called Mora clocks.

Bornholm clock-making began in the 1740s when an English ship, which had longcase clocks in its hold, was stranded. They were sent for repair to a turner named Poul Ottesen Arboe in Rønne and as a result of his repair of them he learned enough about clocks to begin to make his own.

All content from Kiddle encyclopedia articles (including the article images and facts) can be freely used under Attribution-ShareAlike license, unless stated otherwise. Cite this article:
Grandfather clock Facts for Kids. Kiddle Encyclopedia.