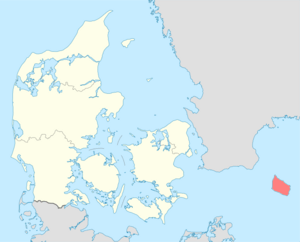 The island is a popular holiday resort for Scandinavians, Germans and Poles. Many yachters come here in the summer.

At the end of World War II, the island was "liberated" by the Soviet red army, and held for several months after the German surrender. The island lies far east of the demarcation line between the allied forces in Europe. For some time the Soviet presence looked like an occupation. It was not until April 5th, 1946 that the island at last was free. But then the Danish government took over and the island is today a Danish colony. But the struggle for a free island still goes on as it can be seen on this page Free Bornholm

All content from Kiddle encyclopedia articles (including the article images and facts) can be freely used under Attribution-ShareAlike license, unless stated otherwise. Cite this article:
Bornholm Facts for Kids. Kiddle Encyclopedia.