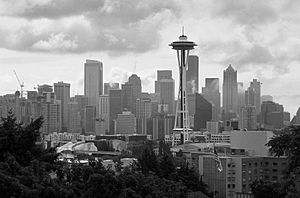 Seattle, a city with an oceanic climate

An oceanic climate, also known as a maritime climate, has cool or mild winters and does not have dry or hot summers. Most places with this type of climate have weather that changes frequently. Most of it is classified as Cfb in the Köppen climate classification with each season having moderate or high rainfall, and warm summers. Cities with this climate include: Dublin, London, Bergen, Bilbao, Paris, Brussels, Amsterdam, Hamburg, Melbourne and Auckland.

There is a subarctic version of it with shorter summers (Cfc), which includes the Faroe Islands. The subtropical highland climate (Cwb and Cwc) is sometimes considered a subtype of the oceanic climate.

All content from Kiddle encyclopedia articles (including the article images and facts) can be freely used under Attribution-ShareAlike license, unless stated otherwise. Cite this article:
Oceanic climate Facts for Kids. Kiddle Encyclopedia.