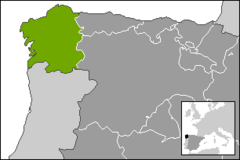 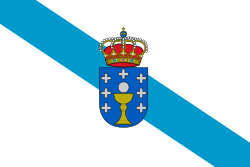 Galicia or Galiza is a nationality in Spain that became a Spanish autonomous community in 1978. It is in the northwest of the Iberian Peninsula. It shares borders with Portugal to the South and the communities of Castile and León and Asturias to the east.

Galicia is a green country with Celtic features. Since re-gaining autonomy in 1978, Galicia has been governed by the Xunta de Galicia (government of Galicia). Galicia was strictly governed from 1990 until 2005, during the Manuel Fraga years. The Xunta de Galicia was then under a socialist president Emilio Perez Touriño, who had made Galicia more liberal than ever before, until 2009. From March 2009 Partido Popular (right-wing party) won power and the new president is Alberto Núñez Feijoo, who won a second term as President in 2012.

Galicia has one main language:Galician "galego". It has many similarities with Portuguese. Galego and Portuguese have the same origin. Spanish is also spoken in Galicia, but mainly as a second language.

Galicia is very famous for its fishing industry and seafood remains an important part of its cuisine. A very popular dish in Galicia is polbo á feira, ("polbo" means octopus). There are many restaurants that serve seafood in Galicia.

All content from Kiddle encyclopedia articles (including the article images and facts) can be freely used under Attribution-ShareAlike license, unless stated otherwise. Cite this article:
Galicia (Spain) Facts for Kids. Kiddle Encyclopedia.