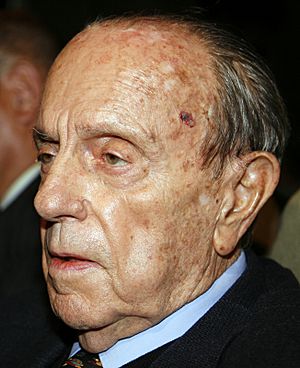 Manuel Fraga Iribarne (November 23, 1922 in Vilalba – January 15, 2012 in Madrid) was a Spanish and Galician politician. Fraga was a politician in Spain under Francisco Franco's dictatorial regime and in the democracy after Franco's death. He was the President of Galicia from 1990 to 2005 and governed the region strictly with a hard hand. He was loved by those who supported him, and loathed by his opponents.

All content from Kiddle encyclopedia articles (including the article images and facts) can be freely used under Attribution-ShareAlike license, unless stated otherwise. Cite this article:
Manuel Fraga Iribarne Facts for Kids. Kiddle Encyclopedia.