José María Alfredo Aznar López (born 25 February 1953) is a Spanish politician who served as the Prime Minister of Spain from 1996 to 2004. He led the People's Party (PP), the main conservative party in Spain.

In his youth, Aznar led the Syndicalist Student Front, a Falangist Roman Catholic organization. He obtained a law degree from the Complutense University of Madrid and his first job was in the public sector, specifically, as an Inspector of the Finances of the State. He joined the Popular Alliance, which was re-founded as the People's Party in 1989. He led the Junta of Castile and León from 1987 to 1989 and was Leader of the Opposition at the national level from 1989 to 1996. In 1995, he survived an assassination attempt from the Basque separatist group ETA. 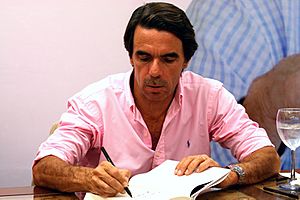 Aznar signing copies of his book in Vigo in 2009

Aznar got the most votes in the 2000 general election. The economy kept growing and unemployment finally began to fall during his second term. In foreign policy, Spain adopted a neoconservative approach and grew closer ties with the United States and the Bush administration, in the aftermath of the September 11 attacks.

Aznar supported the invasions of Afghanistan and Iraq. Support of the PP further declined after the invasion of the Iraq, which was not supported by the majority of the Spanish population, but was nevertheless carried out with Spanish support for the U.S. and the UK. A 2003 poll found by the public research institute CIS found that 91% of Spaniards were against the invasion of Iraq. 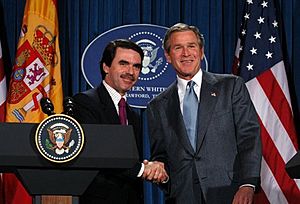 Aznar and George W. Bush in February 2003. Aznar supported the U.S. invasion of Iraq that year, despite major domestic opposition

In 2004, a general election in Spain was scheduled for 14 March, which was not contested by Aznar, but by his successor as lead of the PP, Mariano Rajoy. On 11 March, the 2004 Madrid train bombings occurred, which killed 192 people. The attacks were perpetrated by al-Qaeda, but the government claimed the bombings were perpetrated by ETA. In the few days between the bombings and the election, the PP defended this position: however, a major sector of the population believed the government was lying. This led to a massive drop in support for the PP in the days before the election, and the opposing PSOE's José Luis Rodríguez Zapatero won the election.

Aznar remains active in the private sector, and he sometimes gives his views on the politics of Spain. He was also a member of the Council of State from 2005 to 2006. He is the president of Spanish think tank FAES and is a director of News Corporation. He held the honorary (symbolic) presidency of the PP until 2016, when he renounced to the title.

All content from Kiddle encyclopedia articles (including the article images and facts) can be freely used under Attribution-ShareAlike license, unless stated otherwise. Cite this article:
José María Aznar Facts for Kids. Kiddle Encyclopedia.