Don José Luis Rodríguez Zapatero (; born 4 August 1960 in Valladolid) is a Spanish politician. He was elected for two terms as Prime Minister of Spain. This was in the 2004 and 2008 general elections. On 2 April 2011 he said he would not stand for re-election. His party is the Spanish Socialist Workers' Party (PSOE).

He left the office on 21 December 2011. He was succeeded by Mariano Rajoy. He left the PSOE's Secretary General chair on 4th February 2012 to Alfredo Pérez Rubalcaba. On 9th February he entered the Spanish Council of State. He was also named President of the Advisory Board of the Institute for Cultural Diplomacy, a Berlin-based organization.

On 12 October 2003, during the Fiesta Nacional de España military parade held in Madrid, then opposition leader and presidential candidate Zapatero remained seated as a U.S. Marine Corps honour guard carrying the American flag walked past Zapatero and other VIPs. Everybody else stood as with the rest of the foreign guest armies representations. He declared afterwards that his action was a protest against the war and certainly not intended as an insult to the American people.

One of the first measures he carried out as soon as he took office was to withdraw every Spanish soldier fighting in Iraq, calling the invasion of that country "an error based on lies". In less than a month, his nation's 1,300 troops were withdrawn from Iraq. The relations between Zapatero and former U.S. president George W. Bush were difficult, mostly as a result of Zapatero's opposition to the war in Iraq.

Other main actions taken by the Zapatero administration were the increase of Spanish troops in Afghanistan; the idea of an Alliance of Civilizations; the legalisation of same-sex marriage; reform of abortion law; a peace negotiation attempt with ETA; increase of tobacco restrictions; and the reform of various autonomous statutes, particularly the Statute of Catalonia. 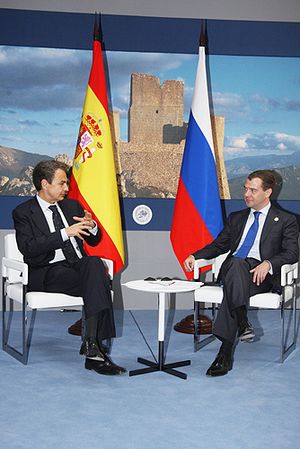 His paternal grandfather, Juan Rodríguez y Lozano (28 July 1893 – Puente Castro, León, 18 August 1936), was a Republican captain, executed by Francisco Franco's National army a month into the Spanish Civil War, for refusing to fight with them. His whereabouts were revealed by fascists in Valladolid.

The memory of Republican Captain Rodríguez y Lozano was also kept alive by his last will, handwritten 24 hours before facing the firing squad, and which can be considered a final declaration of principles.

The will was comprised of six parts, the first three passing his possessions on to his heirs; the fourth, in which he asked for a civil burial and, the fifth, in which he requested his family to forgive those who had tried and executed him and proclaiming his belief in the Supreme Being. In the sixth, Zapatero's grandfather asked his family to clear his name in the future as his creed consisted only in his "love for peace, for good and for improving the living conditions of the lower classes". 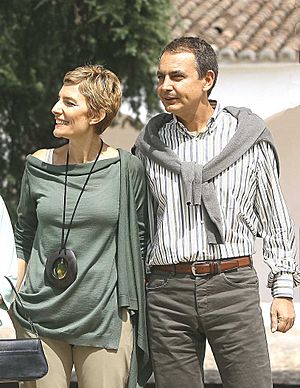 He studied Law at the University of León, graduating in 1982. His performance as a student was above average before his pre-University year. After graduating, Zapatero worked as a teaching assistant in constitutional law at the University of León until 1986 (he continued working some hours a week without pay until 1991). He has declared that the only activity that attracts him besides politics is teaching or, at most, academic research.

Having received successive postponements because of his conditions as a university student and a teaching assistant, Zapatero did not do the compulsory military service. As an MP he was finally exempted.

Zapatero is a supporter of FC Barcelona.

All content from Kiddle encyclopedia articles (including the article images and facts) can be freely used under Attribution-ShareAlike license, unless stated otherwise. Cite this article:
José Luis Rodríguez Zapatero Facts for Kids. Kiddle Encyclopedia.