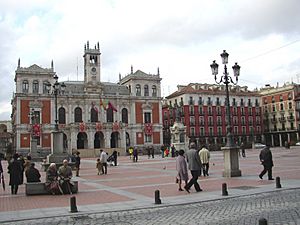 On 19 October, 1469, Ferdinand II of Aragon and Isabella I of Castile married secretely in the Palacio de los Vivero. Also, Christopher Columbus died in the city on 20 May, 1506.

The river that runs through the city is known as the Pisuerga. Valladolid has a hot-summer Mediterranean climate (Csa in the Köppen climate classification).

All content from Kiddle encyclopedia articles (including the article images and facts) can be freely used under Attribution-ShareAlike license, unless stated otherwise. Cite this article:
Valladolid Facts for Kids. Kiddle Encyclopedia.