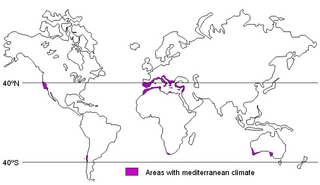 A Mediterranean climate is a climate that has dry summers that are hot or warm as well as winters that are cool or mild with moderate or high rainfall. It includes the climate of much of the land near the Mediterranean Sea. Outside the Mediterranean, one can find this climate only in rather small areas. It is found in many places that are roughly between latitudes 30° to 45° north and south of the equator.

Most large, historic cities of the Mediterranean basin, including Athens, Algiers, Barcelona, Beirut, İzmir, Jerusalem, Marseille, Rome, Valencia and Tunis, lie within Mediterranean climatic zones, as do major cities outside the Mediterranean basin, such as Adelaide, Cape Town, Casablanca, Dushanbe, Los Angeles, Lisbon, Perth, San Francisco, Santiago and Tashkent. A few of the local wind patterns affecting the northern Mediterranean are the Bora winds, the Mistral, and the Sirocco wind which all occur at different times of the year. The Bora is a dry wind causing clear skies that begins in autumn from a cold wind source. It is cold and dry and can cause widespread crop damage. 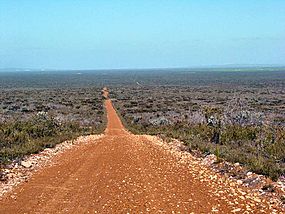 The Fitzgerald River National Park, in Western Australia with the dense scrub vegetation and biodiversity of Mediterranean climate zones. There are 62 plant species which are unique to the 3,299 km² (1,274 mi²) park and a further 48 are rarely found elsewhere.

During summer, regions of Mediterranean climate are strongly influenced by cold ocean currents which keep the weather in the region very dry, stable, and pleasant. Similar to desert climates, in many Mediterranean climates there is a strong diurnal character to daily temperatures in the warm summer months due to strong heating during the day from sunlight and rapid cooling at night.

In winter, Mediterranean climate zones are no longer influenced by the cold ocean currents and therefore warmer water settles near land and causes clouds to form and rainfall becomes much more likely. As a result, areas with this climate receive almost all of their precipitation during their winter and spring seasons, and may go anywhere from 3 to 6 months during the summer without having any significant precipitation. In the lower latitudes, precipitation usually decreases in both the winter and summer because they are closer to the Horse latitudes, thus bringing smaller amounts of rain. Toward the polar latitudes, total moisture usually increases; the Mediterranean climate in Southern Europe has more rain. The rainfall also tends to be more evenly distributed throughout the year in Southern Europe, while in the Eastern Mediterranean (the Levant) and in Southern California the summer is nearly or completely dry and the weather is severe. In places where evapotranspiration is higher, steppe climates tend to prevail, but still follow the weather pattern of the Mediterranean climate.

The majority of the regions with Mediterranean climates have relatively mild winters and very warm summers. However winter and summer temperatures can vary greatly between different regions with a Mediterranean climate. For instance, in the case of winters, Valencia and Los Angeles experience mild temperatures in the winter, with frost and snowfall almost unknown, whereas Tashkent has colder winters with annual frosts and snowfall. Or to consider summer, Athens experiences rather high temperatures in that season (48 °C (118 °F) has been measured in nearby Eleusis). In contrast, San Francisco has cool summers with daily highs around 21 °C (70 °F) due to the continuous upwelling of cold subsurface waters along the coast. Because most regions with a Mediterranean climate are near large bodies of water, temperatures are generally moderate with a comparatively small range of temperatures between the winter low and summer high (although the daily range of temperature during the summer is large due to dry and clear conditions, except along the immediate coasts). Temperatures during winter only occasionally fall below the freezing point and snow is generally seldom seen. In the summer, the temperatures range from mild to very hot, depending on distance from a large body of water, elevation, and latitude. Even in the warmest locations with a Mediterranean-type climate, however, temperatures usually do not reach the highest readings found in adjacent desert regions because of cooling from water bodies, although strong winds from inland desert regions can sometimes boost summer temperatures, quickly increasing the risk of wildfires.

Additionally, the temperature and rainfall pattern for a Csa or even a Csb climate can exist as a microclimate in some high-altitude locations adjacent to a rare tropical As (tropical savanna climate with dry summers, typically in a rainshadow region). These have a favourable climate with mild wet winters and fairly warm, dry summers. 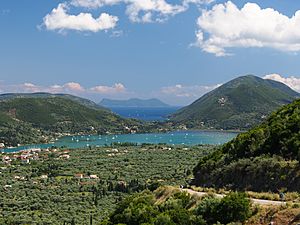 The Ionian Sea, view from the island Lefkada, Greece 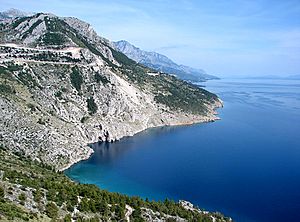 The Mediterranean forests, woodlands, and scrub biome is closely associated with Mediterranean climate zones, as are unique freshwater communities. Particularly distinctive of the climate are sclerophyll shrublands, called maquis in the Mediterranean Basin, chaparral in California, matorral in Chile, fynbos in South Africa, and mallee and kwongan shrublands in Australia. Aquatic communities in Mediterranean climate regions are adapted to a yearly cycle in which abiotic (environmental) controls of stream populations and community structure dominate during floods, biotic components (e.g. competition and predation) controls become increasingly important as the discharge declines, and environmental controls regain dominance as environmental conditions become very harsh (i.e. hot and dry); as a result, these communities are well suited to recover from droughts, floods, and fires. Aquatic organisms in these regions show distinct long-term patterns in structure and function, and are also highly sensitive to the effects of climate change.

The native vegetation of Mediterranean climate lands must be adapted to survive long, hot summer droughts and prolonged wet periods in winter. Mediterranean vegetation examples include the following:

Much native vegetation in Mediterranean climate area valleys have been cleared for agriculture. In places such as the Sacramento Valley and Oxnard Plain in California, draining marshes and estuaries combined with supplemental irrigation has led to a century of intensive agriculture. Much of the Overberg in the southern Cape of South Africa, once covered with renosterveld, has likewise been largely converted to agriculture, mainly wheat. In hillside and mountainous areas, away from urban sprawl, ecosystems and habitats of native vegetation are more sustained.

The fynbos vegetation in the South-western Cape in South Africa is famed for its high floral diversity, and includes such plant types as members of the Restionaceae, Ericas (Heaths) and Proteas. Representatives of the Proteaceae also grow in Australia, such as Banksias. The palette of California native plants is also renowned for its species and cultivar diversity. 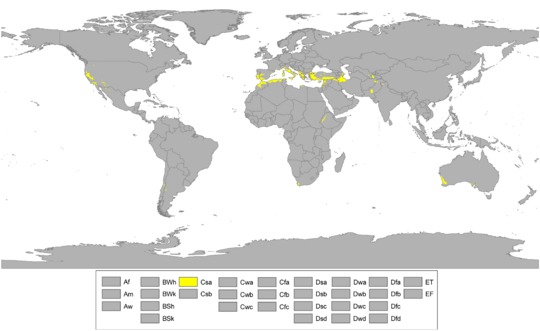 Csa climates are mainly found around the Mediterranean Sea, southwestern Australia, southwestern South Africa, sections of Central Asia, northern sections of Iran and Iraq, the interior of northern California west of the Sierra Nevada, and inland areas of southern Oregon west of the Cascade Mountains. Southern California's coasts also experience hot summers due to the shielding effect of the Channel Islands. However, unshielded areas of that coastline can have warm-summer Mediterranean climates with hot-summer areas just a few miles inland.

All content from Kiddle encyclopedia articles (including the article images and facts) can be freely used under Attribution-ShareAlike license, unless stated otherwise. Cite this article:
Mediterranean climate Facts for Kids. Kiddle Encyclopedia.