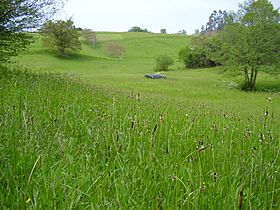 A grassland is an area of land that mostly contains grasses. There are wild grasses, and less trees. Several parts of the world have grasslands. Grasslands are found in Africa, North America, Central Asia, South America, and near the coasts of Australia. The largest grasslands are in East Africa. Grasslands with a few scattered trees are called savannas. Others are called prairies or steppes.

Little rain falls in a grassland biome. Between 25 and 75 cm of rain falls each year, which makes the weather in these savannas hot and sunny in the summer and cool in the winter months. 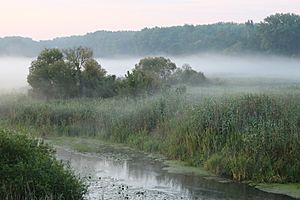 Meadow by the Desna river in Russia

Grassland types by Ellenberg and Mueller-Dombois (1967): 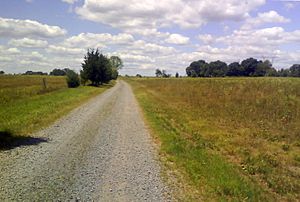 Mid-latitude grasslands, including the prairie and Pacific grasslands of North America, the Pampas of Argentina, Brazil and Uruguay, calcareous downland, and the steppes of Europe. They are classified with temperate savannas and shrublands as the temperate grasslands, savannas, and shrublands biome. Temperate grasslands are the home to many large herbivores, such as bison, gazelles, zebras, rhinoceroses, and wild horses. Carnivores like lions, wolves and cheetahs and leopards are also found in temperate grasslands. Other animals of this region include deers, prairie dogs, mice, jack rabbits, skunks, coyotes, snakes, fox, owls, badgers, blackbirds, grasshoppers, meadowlarks, sparrows, quails, hawks and hyenas.

Grasslands that are flooded seasonally or year-round, like the Everglades of Florida, the Pantanal of Brazil, Bolivia and Paraguay or the Esteros del Ibera in Argentina, are classified with flooded savannas as the flooded grasslands and savannas biome and occur mostly in the tropics and subtropics. The species that live in these grasslands are well adapted to the hydrologic regimes and soil conditions. The Everglades - the world's largest rain-fed flooded grassland - is rich in 11,000 species of seed-bearing plants, 25 species of orchids, 300 bird species, and 150 fish species.

Water-meadows are grasslands that are deliberately flooded for short periods. 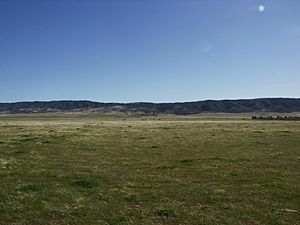 Grassland in the Antelope Valley, California

High-altitude grasslands located on high mountain ranges around the world, like the Páramo of the Andes Mountains. They are part of the montane grasslands and shrublands biome and can be tropical, subtropical, and temperate. The plants and animals, that can be found in the tropical montane, are able to adapt to cool, wet conditions as well as intense sunlight.

Similar to montane grasslands, polar Arctic tundra can have grasses, but high soil moisture means that few tundras are grass-dominated today. However, during the Pleistocene glacial periods (commonly referred to as ice ages), a grassland known as steppe-tundra or mammoth steppe occupied large areas of the Northern Hemisphere. These areas were very cold and arid and featured sub-surface permafrost (hence tundra) but were nevertheless productive grassland ecosystems supporting a wide variety of fauna. As the temperature increased and the climate became wetter at the beginning of the Holocene much of the mammoth steppe transitioned to forest, while the drier parts in central Eurasia remained as a grassland, becoming the modern Eurasian Steppe.

Also called desert grasslands, they are composed of sparse grassland ecoregions located in the deserts and xeric shrublands biome.Temperature extremes and low amount of rainfall characterise these kinds of grasslands. Therefore, plants and animals are well adapted to minimize water loss.

The graminoids are among the most versatile life forms. They became widespread toward the end of the Cretaceous period, and coprolites of fossilized dinosaur feces have been found containing phytoliths of a variety of grasses that include grasses that are related to modern rice and bamboo.

The appearance of mountains in the western United States during the Miocene and Pliocene epochs, a period of some 25 million years, created a continental climate favorable to the evolution of grasslands.

Around 5 million years ago during the Late Miocene in the New World and the Pliocene in the Old World, the first true grasslands occurred. Existing forest biomes declined, and grasslands became much more widespread. It is known that grasslands have existed in Europe throughout the Pleistocene (the last 1.8 million years). Following the Pleistocene ice ages (with their glacials and interglacials), grasslands expanded in the hotter, drier climates, and began to become the dominant land feature worldwide. Since the grasslands have existed for over 1.8 million years, there is high variability. For example steppe-tundra dominated in Northern and Central Europe whereas a higher amount of xerothermic grasslands occurred in the Mediterranean area. Within temperate Europe, the range of types is quite wide and also became unique due to the exchange of species and genetic material between different biomes.

The semi-natural grasslands probably first appeared with the human starting farming. So for the use of agriculture, forests got cleared in Europe. Ancient meadows and pastures were the parts that were suitable for cultivation. The semi-natural grasslands were formed from these areas. The removal of the plants by the grazing animals and later the mowing farmers led to co-existence of other plant species around. In the following, the biodiversity of the plants evolve. Also, the species that already lived there adapted to the new conditions.

Most of the grassland areas have been turned to arable fields and disappeared again.

Nowadays, semi-natural grasslands are rather located in areas that are unsuitable for agricultural farming. 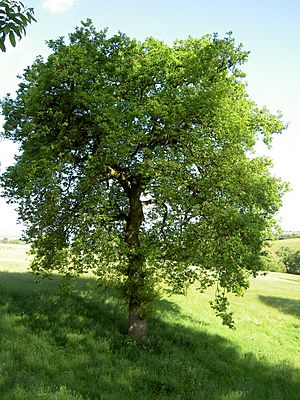 Grasslands dominated by unsown wild-plant communities ("unimproved grasslands") can be called either natural or "semi-natural" habitat. Although their plant communities are natural, their maintenance depends upon anthropogenic activities such as grazing and cutting regimes. The semi-natural grasslands contain many species of wild plants, including grasses, sedges, rushes, and herbs; 25 plant-species per 100 square centimeters can be found. A European record that was found on a meadow in Estonia described 76 species of plants in one square meter. Chalk downlands in England can support over 40 species per square meter.

In many parts of the world, few examples have escaped agricultural improvement (fertilizing, weed killing, plowing, or re-seeding). For example, original North American prairie grasslands or lowland wildflower meadows in the UK are now rare and their associated wild flora equally threatened. Associated with the wild-plant diversity of the "unimproved" grasslands is usually a rich invertebrate fauna; there are also many species of birds that are grassland "specialists", such as the snipe and the little bustard. Due to semi-natural grasslands being referred to as one of the most-species rich ecosystems in the world and essential habitat for many specialists, also including pollinators, there are many approaches to conservation activities lately.

Agriculturally improved grasslands, which dominate modern intensive agricultural landscapes, are usually poor in wild plant species due to the original diversity of plants having been destroyed by cultivation and by the use of fertilizers.

Almost 90% of the European semi-natural grasslands do not exist anymore due to political and economic reasons. This loss only took place during the 20th century. The ones in Western and Central Europe have almost disappeared completely. There are a few left in Northern Europe.

Unfortunately, a large amount of red-listed species are specialists of semi-natural grasslands and are affected by the landscape change due to agriculture of the last century.

The original wild-plant communities having been replaced by sown monocultures of cultivated varieties of grasses and clovers, such as perennial ryegrass and white clover. In many parts of the world, "unimproved" grasslands are one of the most threatened types of habitat, and a target for acquisition by wildlife conservation groups or for special grants to landowners who are encouraged to manage them appropriately. 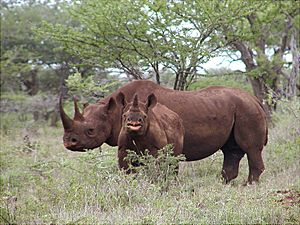 Grassland vegetation can vary a lot. It is depending on the grassland type and on how strong it is affected by human impact. Dominant trees for the semi-natural grassland are Quercus robur, Betula pendula and Coryplus avellana and many kinds of herbs.

In chalk grassland, the plants can vary from height to very short. Quite tall grasses can be found in North American tallgrass prairie, South American grasslands, and African savanna. Woody plants, shrubs or trees may occur on some grasslands – forming savannas, scrubby grassland or semi-wooded grassland, such as the African savannas or the Iberian deheza.

As flowering plants and trees, grasses grow in great concentrations in climates where annual rainfall ranges between 500 and 900 mm (20 and 35 in). The root systems of perennial grasses and forbs form complex mats that hold the soil in place. 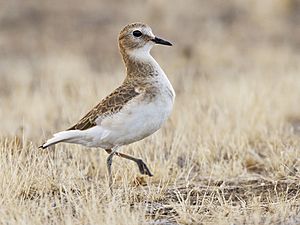 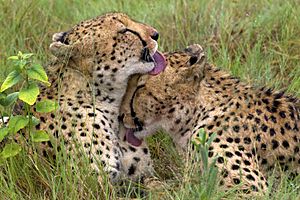 Animals in the African Savanna

Grasslands can be found in many different regions of the world, which is why many different animals can live there. They support the greatest aggregations of large animals on earth. For example, Jaguars, African wild dogs, pronghorn, black-footed ferret, plains bison, mountain plover, African elephant, Sunda tiger, black rhino, white rhino, savanna elephant, greater one-horned rhino, Indian elephant and swift fox. In grasslands, you can find a large number of grazing animals. There are also many impressive animals that live in herds, such as zebras and antelopes. Therefore, there are also many predators in grasslands, like lions and cheetahs.

Furthermore, you can also find Mites, insect larvaenematodes, and earthworms inhabit deep soil, which can reach 6 meters underground in undisturbed grasslands on the richest soils of the world. These invertebrates, along with symbiotic fungi, extend the root systems, break apart hard soil, enrich it with urea and other natural fertilizers, trap minerals and water and promote growth. Some types of fungi make the plants more resistant to insect and microbial attacks.

Grassland in all its form supports a vast variety of mammals, reptiles, birds, and insects. Typical large mammals include the blue wildebeest, American bison, giant anteater, and Przewalski's horse.

Grasslands are very sensitive to disturbances, such as people hunting and killing key species, or ploweing the land to make more space for farms.

To feed a growing human population, most of the world's grasslands, including the American prairies, are converted from natural landscapes to fields of corn, wheat or other crops. Grasslands that have remained largely intact thus far, like East African savannas, are in danger of being lost to agriculture.

The plants and animals that live in grasslands are connected through an unlimited web of interactions. But the removal of key species—such as buffalo and prairie dogs within the American West—and introduction of invasive species, like cane toads in northern Australia, have disrupted the balance in these ecosystems and damaged a number of other species.

Grasslands are home to a number of the foremost magnificent animals on the planet—elephants, bison, lions—and hunters have found them to be enticing prey. But when hunting isn't controlled or is conducted illegally, species can become extinct.

All content from Kiddle encyclopedia articles (including the article images and facts) can be freely used under Attribution-ShareAlike license, unless stated otherwise. Cite this article:
Grassland Facts for Kids. Kiddle Encyclopedia.