Nematode species look very similar to one another. Over 80,000 have been described, of which over 15,000 are parasitic. It has been estimated that the total number of described and undescribed roundworms might be more than 500,000. 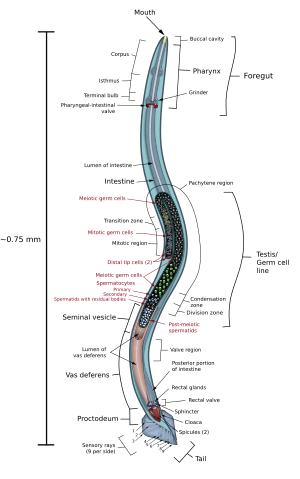 Nematodes are small, slender worms: typically about 5 to 100 µm thick, and 0.1 to 2.5 mm long. The smallest nematodes are microscopic, while free-living species can reach as much as 5 cm (2 in), and some parasitic species are larger still, reaching over 1 m (3 ft) in length. The body is often ornamented with ridges, rings, bristles, or other distinctive structures.

The head of a nematode is relatively distinct. Whereas the rest of the body is bilaterally symmetrical, the head is radially symmetrical, with sensory bristles and, in many cases, solid 'head-shields' radiating outwards around the mouth. The mouth has either three or six lips, which often bear a series of teeth on their inner edges. An adhesive 'caudal gland' is often found at the tip of the tail.

The epidermis is either a syncytium or a single layer of cells, and is covered by a thick collagenous cuticle. The cuticle is often of complex structure, and may have two or three distinct layers. Underneath the epidermis lies a layer of longitudinal muscle cells. The relatively rigid cuticle works with the muscles to create a hydroskeleton, as nematodes lack circumferential muscles. Projections run from the inner surface of muscle cells towards the nerve cords; this is a unique arrangement in the animal kingdom, in which nerve cells normally extend fibres into the muscles rather than vice versa.

The oral cavity is lined with cuticle, which is often strengthened with ridges or other structures, and especially in carnivorous species, may bear a number of teeth. The mouth often includes a sharp stylet, which the animal can thrust into its prey. In some species, the stylet is hollow, and can be used to suck liquids from plants or animals.

The oral cavity opens into a muscular, sucking pharynx, also lined with cuticle. Digestive glands are found in this region of the gut, producing enzymes that start to break down the food. In stylet-bearing species, these may even be injected into the prey.

No stomach is present, with the pharynx connecting directly to a muscleless intestine that forms the main length of the gut. This produces further enzymes, and also absorbs nutrients through its single-cell-thick lining. The last portion of the intestine is lined by cuticle, forming a rectum, which expels waste through the anus just below and in front of the tip of the tail. Movement of food through the digestive system is the result of body movements of the worm. The intestine has valves or sphincters at either end to help control the movement of food through the body.

Nitrogenous waste is excreted in the form of ammonia through the body wall, and is not associated with any specific organs. However, the structures for excreting salt to maintain osmoregulation are typically more complex.

In many marine nematodes, one or two unicellular 'renette glands' excrete salt through a pore on the underside of the animal, close to the pharynx. In most other nematodes, these specialised cells have been replaced by an organ consisting of two parallel ducts connected by a single transverse duct. This transverse duct opens into a common canal that runs to the excretory pore.

Four peripheral nerves run the length of the body on the dorsal, ventral, and lateral surfaces. Each nerve lies within a cord of connective tissue lying beneath the cuticle and between the muscle cells. The ventral nerve is the largest, and has a double structure forward of the excretory pore. The dorsal nerve is responsible for motor control, while the lateral nerves are sensory, and the ventral combines both functions.

The nervous system is also the only place in the nematode body that contains cilia, which are all nonmotile and with a sensory function.

At the anterior end of the animal, the nerves branch from a dense, circular nerve (nerve ring) round surrounding the pharynx, and serving as the brain. Smaller nerves run forward from the ring to supply the sensory organs of the head.

The bodies of nematodes are covered in numerous sensory bristles and papillae that together provide a sense of touch. Behind the sensory bristles on the head lie two small pits, or 'amphids'. These are well supplied with nerve cells, and are probably chemoreception organs. A few aquatic nematodes possess what appear to be pigmented eye-spots, but whether or not these are actually sensory in nature is unclear. 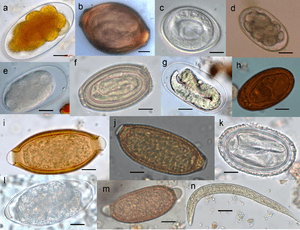 Nematodes commonly parasitic on humans include ascarids (Ascaris), filarias, hookworms, pinworms (Enterobius), and whipworms (Trichuris trichiura). The species Trichinella spiralis, commonly known as the 'trichina worm', occurs in rats, pigs, bears, and humans, and is responsible for the disease trichinosis. Baylisascaris usually infests wild animals, but can be deadly to humans, as well. Dirofilaria immitis is known for causing heartworm disease by inhabiting the hearts, arteries, and lungs of dogs and some cats. Haemonchus contortus is one of the most abundant infectious agents in sheep around the world, causing great economic damage to sheep. In contrast, entomopathogenic nematodes parasitize insects and are mostly considered beneficial by humans, but some attack beneficial insects.

One form of nematode is entirely dependent upon fig wasps, which are the sole source of fig fertilization. They prey upon the wasps, riding them from the ripe fig of the wasp's birth to the fig flower of its death, where they kill the wasp, and their offspring await the birth of the next generation of wasps as the fig ripens. 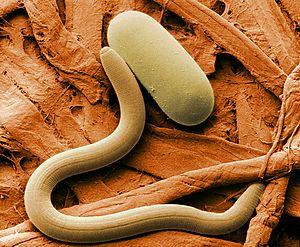 Other nematodes attack bark and forest trees. The most important representative of this group is Bursaphelenchus xylophilus, the pine wood nematode, present in Asia and America and recently discovered in Europe.

Depending on the species, a nematode may be beneficial or detrimental to plant health. From agricultural and horticulture perspectives, the two categories of nematodes are the predatory ones, which kill garden pests such as cutworms and corn earworm moths, and the pest nematodes, such as the root-knot nematode, which attack plants, and those that act as vectors spreading plant viruses between crop plants. Predatory nematodes can be bred by soaking a specific recipe of leaves and other detritus in water, in a dark, cool place, and can even be purchased as an organic form of pest control.

Rotations of plants with nematode-resistant species or varieties is one means of managing parasitic nematode infestations. For example, marigolds, grown over one or more seasons (the effect is cumulative), can be used to control nematodes. Another is treatment with natural antagonists such as the fungus Gliocladium roseum. Chitosan, a natural biocontrol, elicits plant defense responses to destroy parasitic cyst nematodes on roots of soybean, corn, sugar beet, potato, and tomato crops without harming beneficial nematodes in the soil. Soil steaming is an efficient method to kill nematodes before planting a crop, but indiscriminately eliminates both harmful and beneficial soil fauna.

The golden nematode Globodera rostochiensis is a particularly harmful variety of nematode pest that has resulted in quarantines and crop failures worldwide. CSIRO has found a 13- to 14-fold reduction of nematode population densities in plots having Indian mustard Brassica juncea green manure or seed meal in the soil.

All content from Kiddle encyclopedia articles (including the article images and facts) can be freely used under Attribution-ShareAlike license, unless stated otherwise. Cite this article:
Nematode Facts for Kids. Kiddle Encyclopedia.