A potato is a root vegetable, the Solanum tuberosum. It is a small plant with large leaves. The part of the potato that people eat is a tuber that grows under the ground.

A potato contains a lot of starch and other carbohydrates. Potato usually has a light-brown or yellowish skin and is white or yellow inside. If the potato gets light on it, the tuber turns green and will be poisonous. 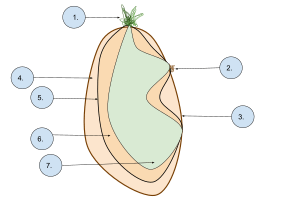 The potato is originally from the high and cool areas of the Andes of Peru. It was grown as a food crop more than 7,000 years ago. When Spanish conquistadores came to South America in the 1500s they took potatoes back to Europe.

It took nearly 200 years for the potato to become a widely grown crop. In the 1780s the farmers in Ireland began growing potatoes because they grew well in the poor soils. They also have most of the vitamins that people need to survive. The Irish became so dependent on the potato that when the crop failed in 1845 there was a famine and many people starved to death.

The potato plant is now grown in many different parts of the world. Captain William Bligh planted potatoes on Bruny Island, Tasmania in 1792. In Australia they are now the largest vegetable crop.

Scientists in Germany have used genetic engineering to make a potato called the Amflora, which could be grown to make starch for making other things in factories.

William Shakespeare wrote that the potato was an aphrodisiac, but there is no evidence to show this is true. 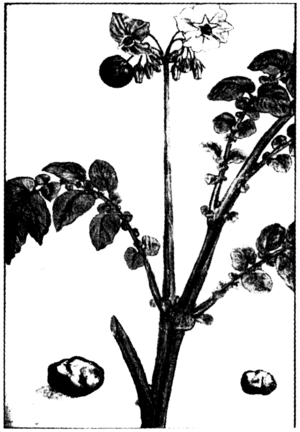 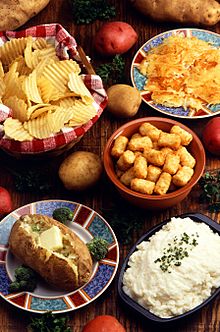 Potatoes are prepared in many ways: skin-on or peeled, whole or cut up, with seasonings or without. The only requirement involves cooking to swell the starch granules. Most potato dishes are served hot but some are first cooked, then served cold, notably potato salad and potato chips (crisps). Common dishes are: mashed potatoes, which are first boiled (usually peeled), and then mashed with milk or yogurt and butter; whole baked potatoes; boiled or steamed potatoes; French-fried potatoes or chips; cut into cubes and roasted; scalloped, diced, or sliced and fried (home fries); grated into small thin strips and fried (hash browns); grated and formed into dumplings, Rösti or potato pancakes. Unlike many foods, potatoes can also be easily cooked in a microwave oven and still retain nearly all of their nutritional value, provided they are covered in ventilated plastic wrap to prevent moisture from escaping; this method produces a meal very similar to a steamed potato, while retaining the appearance of a conventionally baked potato. Potato chunks also commonly appear as a stew ingredient. Potatoes are boiled between 10 and 25 minutes, depending on size and type, to become soft.

Other than for eating

Potatoes are also used for purposes other than eating by humans, for example: 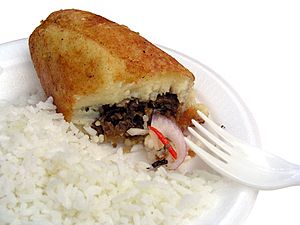 Peruvian cuisine naturally contains the potato as a primary ingredient in many dishes, as around 3,000 varieties of this tuber are grown there. Some of the more notable dishes include boiled potato as a base for several dishes or with ají-based sauces like in Papa a la Huancaína or ocopa, diced potato for its use in soups like in cau cau, or in Carapulca with dried potato (papa seca). Smashed condimented potato is used in causa Limeña and papa rellena. French-fried potatoes are a typical ingredient in Peruvian stir-fries, including the classic dish lomo saltado.

Chuño is a freeze-dried potato product traditionally made by Quechua and Aymara communities of Peru and Bolivia, and is known in various countries of South America, including Peru, Bolivia, Argentina, and Chile. In Chile's Chiloé Archipelago, potatoes are the main ingredient of many dishes, including milcaos, chapaleles, curanto and chochoca. In Ecuador, the potato, as well as being a staple with most dishes, is featured in the hearty locro de papas, a thick soup of potato, squash, and cheese. 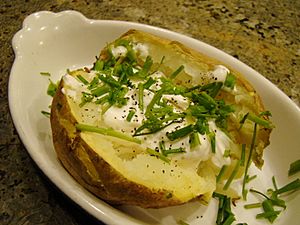 In the UK, potatoes form part of the traditional staple, fish and chips. Roast potatoes are commonly served as part of a Sunday roast dinner and mashed potatoes form a major component of several other traditional dishes, such as shepherd's pie, bubble and squeak, and bangers and mash. New potatoes may be cooked with mint and are often served with butter.

The Tattie scone is a popular Scottish dish containing potatoes. Colcannon is a traditional Irish food made with mashed potato, shredded kale or cabbage, and onion; champ is a similar dish. Boxty pancakes are eaten throughout Ireland, although associated especially with the North, and in Irish diaspora communities; they are traditionally made with grated potatoes, soaked to loosen the starch and mixed with flour, buttermilk and baking powder. A variant eaten and sold in Lancashire, especially Liverpool, is made with cooked and mashed potatoes.

Bryndzové halušky is the Slovakian national dish, made of a batter of flour and finely grated potatoes that is boiled to form dumplings. These are then mixed with regionally varying ingredients. 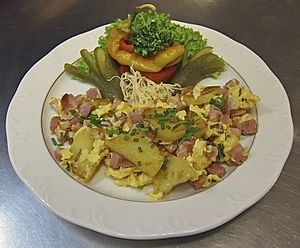 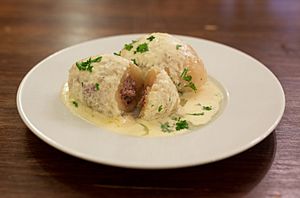 Cepelinai is Lithuanian national dish. They are a type of dumpling made from grated raw potatoes boiled in water and usually stuffed with minced meat, although sometimes dry cottage cheese (curd) or mushrooms are used instead. In Western Europe, especially in Belgium, sliced potatoes are fried to create frieten, the original French fried potatoes. Stamppot, a traditional Dutch meal, is based on mashed potatoes mixed with vegetables.

In France, the most notable potato dish is the Hachis Parmentier, named after Antoine-Augustin Parmentier, a French pharmacist, nutritionist, and agronomist who, in the late 18th century, was instrumental in the acceptance of the potato as an edible crop in the country. Pâté aux pommes de terre is a regional potato dish from the central Allier and Limousin regions. Gratin dauphinois, consisting of baked thinly sliced potatoes with cream or milk, and tartiflette, with Reblochon cheese, are also widespread.

In the north of Italy, in particular, in the Friuli region of the northeast, potatoes serve to make a type of pasta called gnocchi. Similarly, cooked and mashed potatoes or potato flour can be used in the Knödel or dumpling eaten with or added to meat dishes all over central and Eastern Europe, but especially in Bavaria and Luxembourg. Potatoes form one of the main ingredients in many soups such as the vichyssoise and Albanian potato and cabbage soup. In western Norway, komle is popular. 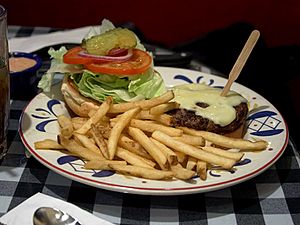 French fries served with a hamburger 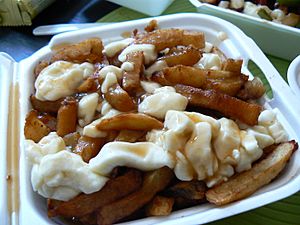 In the US, potatoes have become one of the most widely consumed crops and thus have a variety of preparation methods and condiments. French fries and often hash browns are commonly found in typical American fast-food burger "joints" and cafeterias. One popular favourite involves a baked potato with cheddar cheese (or sour cream and chives) on top, and in New England "smashed potatoes" (a chunkier variation on mashed potatoes, retaining the peel) have great popularity. Potato flakes are popular as an instant variety of mashed potatoes, which reconstitute into mashed potatoes by adding water, with butter or oil and salt to taste. A regional dish of Central New York, salt potatoes are bite-size new potatoes boiled in water saturated with salt then served with melted butter. At more formal dinners, a common practice includes taking small red potatoes, slicing them, and roasting them in an iron skillet. Among American Jews, the practice of eating latkes (fried potato pancakes) is common during the festival of Hanukkah.

A traditional Acadian dish from New Brunswick is known as poutine râpée. The Acadian poutine is a ball of grated and mashed potato, salted, sometimes filled with pork in the centre, and boiled. The result is a moist ball about the size of a baseball. It is commonly eaten with salt and pepper or brown sugar. It is believed to have originated from the German Klöße, prepared by early German settlers who lived among the Acadians. Poutine, by contrast, is a hearty serving of French fries, fresh cheese curds and hot gravy. Tracing its origins to Quebec in the 1950s, it has become a widespread and popular dish throughout Canada.

Potato grading for Idaho potatoes is performed in which No. 1 potatoes are the highest quality and No. 2 are rated as lower in quality due to their appearance (e.g. blemishes or bruises, pointy ends). Potato density assessment can be performed by floating them in brines. High-density potatoes are desirable in the production of dehydrated mashed potatoes, potato crisps and french fries.

In South Asia, the potato is a very popular traditional staple. In India, the most popular potato dishes are aloo ki sabzi, batata vada, and samosa, which is spicy mashed potato mixed with a small amount of vegetable stuffed in conical dough, and deep fried. Potatoes are also a major ingredient as fast food items, such as aloo chaat, where they are deep fried and served with chutney. In Northern India, alu dum and alu paratha are a favourite part of the diet; the first is a spicy curry of boiled potato, the second is a type of stuffed chapati.

A dish called masala dosa from South India is very notable all over India. It is a thin pancake of rice and pulse paste rolled over spicy smashed potato and eaten with sambhar and chutney. Poori in south India in particular in Tamil Nadu is almost always taken with smashed potato masal. Other favourite dishes are alu tikki and pakoda items.

Vada pav is a popular vegetarian fast food dish in Mumbai and other regions in the Maharashtra in India.

Aloo posto (a curry with potatoes and poppy seeds) is immensely popular in East India, especially Bengal. Although potatoes are not native to India, it has become a vital part of food all over the country especially North Indian food preparations. In Tamil Nadu this tuber acquired a name based on its appearance 'urulai-k-kizhangu' (உருளைக் கிழங்கு) meaning cylindrical tuber.

The Aloo gosht, Potato and meat curry, is one of the popular dishes in South Asia, especially in Pakistan.

In East Asia, particularly Southeast Asia, rice is by far the predominant starch crop, with potatoes a secondary crop, especially in China and Japan. However, it is used in northern China where rice is not easily grown, with a popular dish being 青椒土豆丝 (qīng jiāo tǔ dòu sī), made with green pepper, vinegar and thin slices of potato. In the winter, roadside sellers in northern China will also sell roasted potatoes. It is also occasionally seen in Korean and Thai cuisines.

All content from Kiddle encyclopedia articles (including the article images and facts) can be freely used under Attribution-ShareAlike license, unless stated otherwise. Cite this article:
Potato Facts for Kids. Kiddle Encyclopedia.