The nightshades (Solanaceae) are a family of plants. All of them bear flowers. Many members of the family are edible, but some are poisonous. Very often, only certain parts of the plant are edible or poisonous. Well-known members of this family are chili peppers, petunias, deadly nightshade, mandrakes, potatoes, tomatoes, aubergines (eggplants) and tobacco.

Because it is thought that nightshades can cause or increase swelling and pain, many people do not eat them.

The following taxonomic synopsis of the Solanaceae, including subfamilies, tribes and genera, is based on the most recent molecular phylogenetics studies of the family: 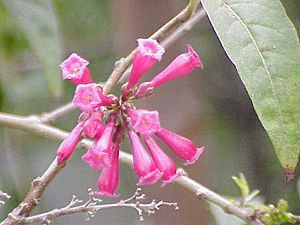 Cestrum elegans, a cestroidea used as an ornamental 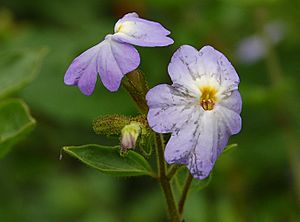 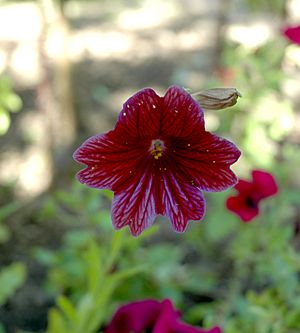 This subfamily is characterised by the presence of pericyclic fibres, an androecium with four or five stamens, frequently didynamous. The basic chromosome numbers are highly variable, from x=7 to x=13. The subfamily consists of eight genera (divided into three tribes) and about 195 species distributed throughout the Americas. The genus Cestrum is the most important, as it contains 175 of the 195 species in the subfamily. The Cestreae tribe is unusual because it includes taxa with long chromosomes (from 7.21 to 11.511 µm in length), when the rest of the family generally possesses short chromosomes (for example between 1.5 and 3.52 µm in the Nicotianoideae)

This subfamily is characterized by the presence of drupes as fruit and seeds with curved embryos and large fleshy cotyledons. The basic chromosome number is x=13. It includes four genera and five species distributed throughout the Greater Antilles. Some authors suggest their molecular data indicate the monotypic genera Tsoala Bosser & D'Arcy should be included in this subfamily, endemic to Madagascar, and Metternichia to the southeast of Brazil. Goetzeaceae Airy Shaw is considered as a synonym of this subfamily. 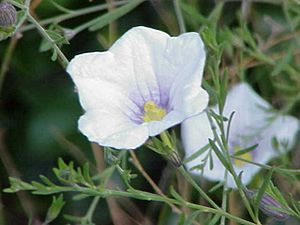 Molecular phylogenetics indicates that Petunioideae is the sister clade of the subfamilies with chromosome number x=12 (Solanoideae and Nicotianoideae). They contain calistegins, alkaloids similar to the tropanes. The androecium is formed of four stamens (rarely five), usually with two different lengths. The basic chromosome number of this subfamily can be x=7, 8, 9 or 11. It consists of 13 genera and some 160 species distributed throughout Central and South America. Molecular data suggest the genera originated in Patagonia. Benthamiella, Combera, and Pantacantha form a clade that can be categorized as a tribe (Benthamielleae) that should be in the subfamily Goetzeoideae. 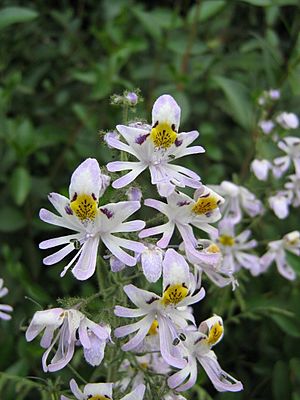 The Schizanthoideae include annual and biennial plants with tropane alkaloids, without pericyclic fibres, with characteristic hair and pollen grains. The flowers are zygomorphic. The androecium has two stamens and three stamenodes, anther dehiscence is explosive. In terms of fruit type,the Schizanthoidae retain the plesiomorphic fruit form of the family Solanaceae, capsules, which rely on an anemochorous, abiotic form of dispersal. This is present in Schizanthoidae due both to the genetic constraints of early divergence (see below) as well as Schizanthus evolution and presence in open habitats. The embryo is curved. The basic chromosome number is x=10. Schizanthus is a somewhat atypical genus among the Solanaceae due to its strongly zygomorphic flowers and basic chromosome number. Morphological and molecular data suggest Schizanthus is a sister genus to the other Solanaceae and diverged early from the rest, probably in the late Cretaceous or in the early Cenozoic, 50 million years ago. The great diversity of flower types within Schizanthus has been the product of the species’ adaptation to the different types of pollinators that existed in the Mediterranean, high alpine, and desert ecosystems then present in Chile and adjacent areas of Argentina.

Annual plants with pericyclic fibres, their flowers are zygomorphic, the androecium has four didynamous stamens or three stamenodes; the embryo is straight and short. The basic chromosome number is x=12. It includes four genera and some 30 species distributed throughout South America. 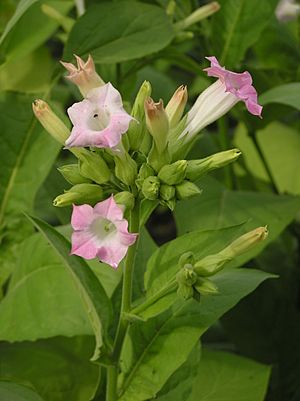 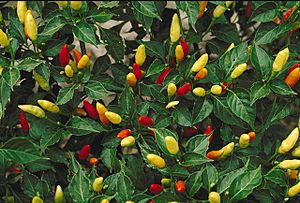 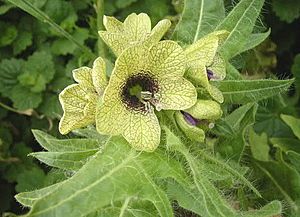 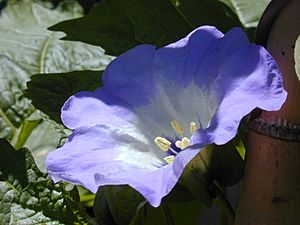 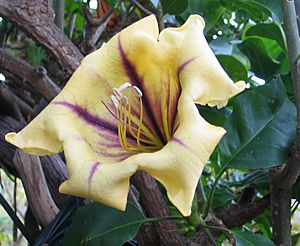 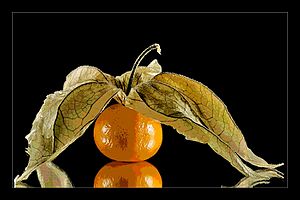 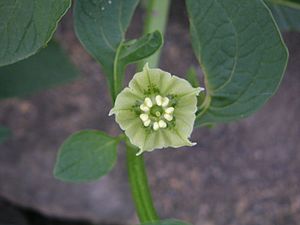 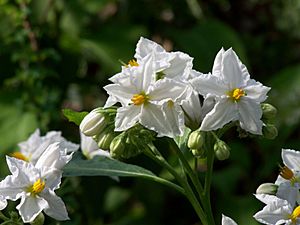 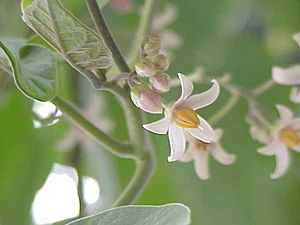 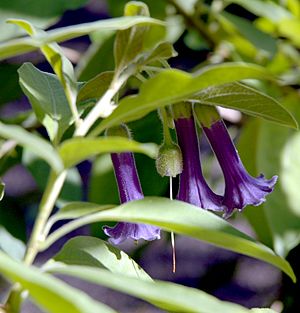 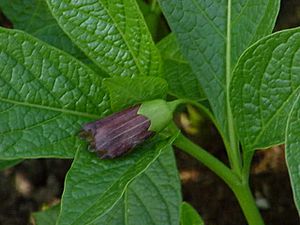 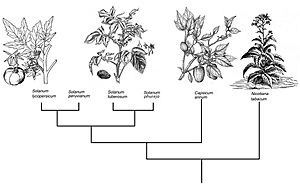 Cladogram showing the relationship between some species of the subfamily Solanoideae

All content from Kiddle encyclopedia articles (including the article images and facts) can be freely used under Attribution-ShareAlike license, unless stated otherwise. Cite this article:
Nightshade Facts for Kids. Kiddle Encyclopedia.