Tobacco is a plant of the nightshade family, found mainly in North America and South America. Dried tobacco leaves are often smoked in cigars, cigarettes and pipes, but can also be chewed in the mouth or sniffed in the nose. Tobacco contains a very powerful addictive chemical called nicotine which makes it very hard for tobacco users to stop using it.

Native Americans used tobacco before Europeans arrived in America. These Europeans learned to smoke and brought it back to Europe, where it became very popular. At that time tobacco was usually smoked in a pipe.

The Europeans who moved to America started to farm tobacco so that they could sell it in Europe. This became one of the main causes of the African slave trade. In 1610 a European man called John Rolfe arrived in the American state of Virginia and set up a tobacco farm which made him very rich. Rolfe was the first farmer to use nicotiana tabacum, which is the type of tobacco most commonly smoked today. He also married Pocahontas, a Native American woman who became famous when she went to live in London.

In the 17th and 18th centuries tobacco made farmers very rich and towns quickly grew in the states of Virginia, North Carolina and South Carolina. In 1883 one third of United States tax money came from tobacco.

In 1864 the first American tobacco factory opened to produce 20 million cigarettes annually. By 1964 the cigarette contained over 500 added chemicals. Today tobacco manufacturers are still not required by law to list the 500+ ingredients. 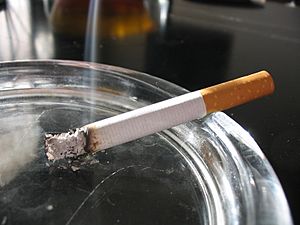 Tobacco users (especially smokers) risk many very serious and often deadly illnesses, such as cancer, strokes, heart disease, and lung disease. The United States' Centers for Disease Control and Prevention describes tobacco use as "the single most important preventable risk to human health in developed countries and an important cause of premature (early) death worldwide". There are over 4800 chemicals in tobacco, including arsenic. 64 of them are known to cause cancer.

All content from Kiddle encyclopedia articles (including the article images and facts) can be freely used under Attribution-ShareAlike license, unless stated otherwise. Cite this article:
Tobacco Facts for Kids. Kiddle Encyclopedia.