John Rolfe (1585–1622) was one of the early English settlers of North America. He is credited with the first successful cultivation of tobacco as an export crop in the Colony of Virginia. 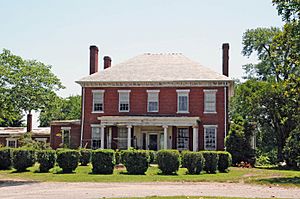 Rolfe was born in Heacham, Norfolk, England, as the son of John Rolfe and Dorothea Mason, and was baptized on 6 May 1585. At the time, Spain held a virtual monopoly on the lucrative tobacco trade. Most Spanish colonies in the New World were located in southern climates more favorable to tobacco growth than the English settlements, notably Jamestown.

As the consumption of tobacco had increased, the balance of trade between England and Spain began to be seriously affected. Rolfe was one of a number of businessmen who saw the opportunity to undercut Spanish imports by growing tobacco in England's new colony in Virginia. Rolfe had somehow obtained seeds to take with him from a special popular strain; then being grown in Trinidad South America, even though Spain had declared a penalty of death to anyone selling such seeds to a non-Spaniard.

In competing with Spain for European markets, there was another problem beside the warmer climates the Spanish settlements enjoyed. The native tobacco from Virginia was not liked by the English settlers, nor did it appeal to the market in England. However, Rolfe wanted to introduce sweeter strains from Trinidad, using the hard-to-obtain Spanish seeds he brought with him.

In 1611, Rolfe was the first to commercially cultivate Nicotiana tabacum tobacco plants in North America; export of this sweeter tobacco beginning in 1612 helped turn the Virginia Colony into a profitable venture. Rolfe named his Virginia-grown strain of the tobacco "Orinoco", possibly in honour of tobacco popularizer Sir Walter Raleigh's expeditions in the 1580s up the Orinoco River in Guiana in search of the legendary City of Gold, El Dorado.

In 1612, Rolfe established Varina Farms, a plantation along the James River about 30 miles (50 km) upstream from Jamestown, and across the river from Sir Thomas Dale's progressive development at Henricus. The first harvest of four barrels of tobacco leaf was exported from Virginia to England in March 1614, and soon, Rolfe and others were exporting vast quantities of the new cash crop. New plantations began growing along the James River, where export shipments could use wharfs along the river. 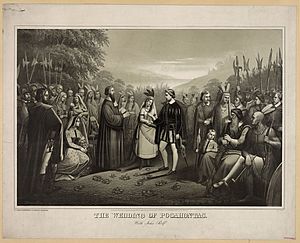 The wedding of Pocahontas with John Rolfe

Rolfe married Pocahontas, daughter of the local Native American leader Powhatan, on 5 April 1614. A year earlier, Alexander Whitaker had converted Pocahontas to Christianity and renamed her "Rebecca" when she had her baptism. Richard Buck officiated their wedding. Powhatan gave the newlyweds property just across the James River from Jamestown. They never lived on the land, which spanned thousands of acres, and instead lived for two years on Rolfe's plantation, Varina Farms, across the James River from the new community of Henricus.

Their marriage created a climate of peace between the Jamestown colonists and Powhatan's tribes for several years; in 1615, Ralph Hamor wrote that "Since the wedding, we have had friendly commerce and trade not only with Powhatan but also with his subjects round about us." Their son Thomas was born on 30 January 1615.

John and Rebecca Rolfe traveled to England on the Treasurer, commanded by Samuel Argall, in 1615 with their young son. They arrived at the port of Plymouth on 12 June and settled in Brentford. However, as they were preparing to return to Virginia in March 1617, Rebecca became ill and died. Her body was interred in St George's Church, Gravesend. Their two-year-old son Thomas survived, but was adopted by Sir Lewis Stukley and later by John's brother, Henry Rolfe. John then returned to Virginia. 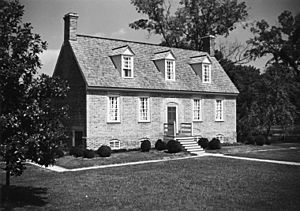 In 1619, Rolfe married Jane Pierce, daughter of the English colonist Captain William Pierce. They had a daughter, Elizabeth, in 1620. Rolfe died in 1622.

The land given by Powhatan (now known as Smith's Fort Plantation, located in Surry County) was willed to Rolfe's son with Pocahontas, Thomas.

All content from Kiddle encyclopedia articles (including the article images and facts) can be freely used under Attribution-ShareAlike license, unless stated otherwise. Cite this article:
John Rolfe Facts for Kids. Kiddle Encyclopedia.