Kids Encyclopedia Facts
Not to be confused with Henry County, Virginia.

Named after the settlement of Henricus, Henrico was first incorporated as the City of Henrico. In 1634, Henrico was reorganized as Henrico Shire, one of the eight original Shires of Virginia. It is one of the United States' oldest counties. The City of Richmond was officially part of Henrico County until 1842, when it became a fully independent city.

The present-day Henrico County curves around the City of Richmond, surrounding it to the west, the north, and the east. The county is bounded by the Chickahominy River to the north and the James River and Richmond to the south.

Richmond Raceway is in the central portion of Henrico County near Mechanicsville, just north of the Richmond city limits. The raceway seats approximately 60,000 people and holds two NASCAR doubleheader race weekends per year. Additionally, Richmond International Airport is located in the eastern portion of Henrico County in Sandston. Top private employers in the county include Capital One, Bon Secours Richmond Health System, and Anthem.

In 1611, Thomas Dale founded the Citie of Henricus on a peninsula in the James River that is now called Farrar's Island. Henricus was named for Henry Frederick, Prince of Wales and was destroyed during the Indian massacre of 1622.

In 1634, Henrico Shire became one of the eight original Shires of Virginia established by the British in the Virginia Colony. Since then, 10 counties and 3 independent cities have been formed from the original territory of Henrico Shire.

Since becoming independent in 1842, the City of Richmond has successfully annexed portions of Henrico five times. Chesterfield County annexed the site of Henricus in 1922.

In 1981, the Virginia General Assembly placed a moratorium on all annexations throughout the state. Henrico's borders have not changed since Richmond's 1942 annex.

The original county seat was at Varina, at the Varina Farms plantation across the James River from Henricus. John Rolfe built this plantation, where he lived with his wife, Pocahontas. Henrico's government was located at Varina from around 1640 until 1752.

In 1752, Henrico relocated its seat to a more central location inside the city Richmond between Church Hill and what is now Tobacco Row. The county seat remained at 22nd and Main St in Richmond even after the city's government became fully independent of the county in 1842. It was not until 1974 when the county moved out of the Old Henrico County Courthouse to a complex in the western portion of the county at the intersection of Parham Road and Hungary Springs Road in Laurel.

In addition to the 1974 complex, in 1988 the county opened its Eastern Government Center to be more convenient to county residents in the Eastern portion of the county. It is located on Nine Mile Road. 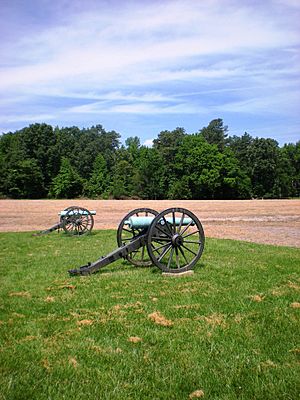 Cannons at the site of the Battle of Malvern Hill

During the Civil War, in 1862 Henrico County was the site of the following numerous battles during the Peninsula Campaign:

Additional significant battles took place in 1864 during the Overland Campaign prior to and during the Siege of Petersburg, which led to the fall of Richmond. Confederate General J.E.B. Stuart was mortally wounded in Henrico County at the Battle of Yellow Tavern on May 12, 1864.

Henrico County is one of only two counties in Virginia that maintains its own roads, with the other being Arlington County. This special status was due to the existence of county highway departments prior to the creation of the state agency that is now VDOT in 1927, and the assumption of local roads in most counties by that agency in 1932. (Henrico and Arlington were grandfathered and allowed to continue pre-existing arrangements.) The control of the roads system is considered a powerful advantage for community urban planners, who can require developers to contribute to funding needed for road needs serving the planners' projects.

Henrico County is the site of Richmond International Airport. It also hosts an Amtrak rail passenger station and purchases public bus route services from Greater Richmond Transit Company, an FTA-funded public service company that is owned equally by the City of Richmond and neighboring Chesterfield County.

Some old roads continue to be in use today, such as Horsepen Rd., Three Chopt Rd., and Quiocassin Rd.

Other major highways include:

There are no existing incorporated towns, and no new municipalities can be created within the county. Henrico was the third Virginia county (after Arlington and Fairfax counties) to be affected by a state law that prohibits the creation of any new towns or cities within the boundaries of a county with a population density of 1,000 or more per square mile.

Prior to 1870, the Town and later City of Richmond was located within Henrico County. Under a new Virginia state constitution in 1870, and as further clarified by rewritten one in 1902, Richmond became an independent city.

At the end of the 19th century and in the early 20th century, several small incorporated towns were chartered by Acts of Assembly, primarily in areas of the county near to, but outside of, the city limits. As listed by the Secretary of the Commonwealth, these included:

For many years, the United States Postal Service considered most of Henrico County to be unincorporated Richmond, and the majority of locations in the county had a Richmond address. However, in 2008 county residents won the right to recognize Henrico County as the locality to which they pay the majority of their taxes. As of October 1, 2008, the primary mailing address for the majority of the county was officially changed to Henrico. It was estimated that the county would recover $5 million in misdirected tax dollars due to the address change. This move has set a precedent causing many other localities in Virginia who are officially recognized by the United States Postal Service as the nearest major city to consider petitioning the United States Postal Service for their own official mailing address bearing the name of the locality to which residents actually pay their taxes.

Henrico County is the county that handles hazardous material spills and related problems (with three HAZMAT Teams) for the entire Central Virginia Region. Partly because of this, Central Virginia has total interoperability of Emergency Communications (Police, Fire, Recreation and Parks, Volunteer Rescue Squads, etc.) between the cities and more than ten counties.

Henrico County has the highest bond rating (Triple, triple-A) from the three bond rating agencies in the United States, which means Henrico is known nationwide for its solid fiscal responsibility.

Henrico County residents are served by the Henrico Area Mental Health and Developmental Services, which has a CARF three-year accreditation. All fees for services rendered are based on financial need, providing mental health and recovery support services to thousands who otherwise would not be able to afford this due to their own limited financial resources. Nobody is denied service due to an inability to pay.

Altria Group (formerly Philip Morris) had its corporate headquarters in an unincorporated area in Henrico County. In 2003 Philip Morris announced that it would move its headquarters from New York City to Virginia. The company said that it planned to keep around 750 employees in its former headquarters. Brendan McCormick, a spokesperson for Philip Morris, said that the company estimated that the move would save the company over $60 million each year. This relocation was made with the help of the Henrico County Economic Development Authority and the Greater Richmond Partnership, regional economic development organizations who also helped locate Aditya Birla Minacs, Alfa Laval, Genworth Financial, and Blue Bell Ice Cream to the county.

According to the County's 2014 Comprehensive Annual Financial Report, the top employers in the county are:

All content from Kiddle encyclopedia articles (including the article images and facts) can be freely used under Attribution-ShareAlike license, unless stated otherwise. Cite this article:
Henrico County, Virginia Facts for Kids. Kiddle Encyclopedia.