Appomattox County is a United States county located in the Piedmont region and near the center of the Commonwealth of Virginia. The county is part of the Lynchburg, VA Metropolitan Statistical Area, and its county seat is the town of Appomattox.

Appomattox County was created in 1845 from parts of four other Virginia counties. The name of the county comes from the Appamatuck Indians, who lived in the area. As of the 2010 census, the population was 14,973. This was an increase of more than 9 percent from the 13,705 reported in the 2000 census. 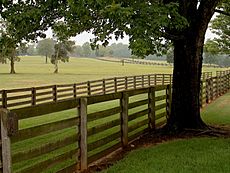 Appomattox County is located in the rolling hills of the piedmont region of Virginia.

All content from Kiddle encyclopedia articles (including the article images and facts) can be freely used under Attribution-ShareAlike license, unless stated otherwise. Cite this article:
Appomattox County, Virginia Facts for Kids. Kiddle Encyclopedia.