Prince Edward County is located in the Commonwealth of Virginia. As of the 2020 census, the population was 21,849. Its county seat is Farmville. 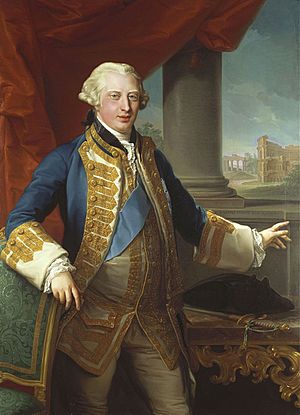 Prince Edward, Duke of York and Albany, for whom the county was named

Prince Edward County, Virginia was formed in the Virginia Colony in 1754 from Amelia County. It was named for Prince Edward, second son of Frederick, Prince of Wales and younger brother of George III of the United Kingdom.

The original county seat housed the courthouse and was called Prince Edward Courthouse; it is now the village of Worsham.

Near the headwaters of the Appomattox River, the Town of Farmville was formed in 1798, and was incorporated in 1912. The county seat was moved from Worsham to Farmville in 1871.

In the 1850s, the Southside Railroad between Petersburg and Lynchburg was built through Farmville between Burkeville and Pamplin City. The route, which was subsidized by a contribution from Farmville, required an expensive crossing of the Appomattox River slightly downstream which became known as the High Bridge.

After the Civil War, under the leadership of former Confederate General William "Billy" Mahone, the Southside Railroad was rebuilt. In 1870, it was combined with the Norfolk and Petersburg Railroad and the Virginia and Tennessee Railroad to form Mahone's Atlantic, Mississippi and Ohio Railroad (AM&O), which extended 400 miles across the southern tier of Virginia from Norfolk on Hampton Roads to Bristol. After the Financial Panic of 1873, the AM&O fell into default on its debt; it was purchased in the early 1880s by new owners who renamed it the Norfolk and Western (N&W). In 1982, it became part of the current Norfolk Southern Railway system.

Due to the high cost of maintaining the High Bridge over the Appomattox River, the line through Farmville was downgraded and eventually abandoned, in favor of the Farmville Belt Line, which had been built on a more direct line between Burkeville and Pamplin City, as had originally been envisioned in the planning for the Southside Railroad.

Another railroad formerly served Farmville. In the late 19th century, the narrow gauge Farmville and Powhatan Railroad was built from Farmville through Cumberland, Powhatan, and Chesterfield counties to reach Bermuda Hundred on the navigable portion of the James River near its confluence with the Appomattox River at City Point. It was later renamed the Tidewater and Western Railroad, but was dismantled in the early 20th century.

Prince Edward County is the source of Davis v. County School Board of Prince Edward County, a case incorporated into Brown v. Board of Education, which ultimately resulted in the US Supreme Court decision that segregated public schools were unconstitutional. This ultimately led to the desegregation of public schools in the U.S. Among the five cases decided under Brown, Davis was the only one initiated by students, after they walked out in 1951 to protest overcrowding and poor conditions at their segregated school under Jim Crow laws.

The all-black R.R. Moton High School, named after Robert Russa Moton, a noted educator from neighboring Amelia County, did not have a gymnasium, cafeteria, or teachers' restrooms. Due to overcrowding, three plywood buildings had been erected, and some students had to take classes in a school bus parked outside. Teachers and students did not have desks or blackboards. The school's requests for additional funds were denied by the all-white school board. On Monday, April 23, 1951, Barbara Johns, the sixteen-year-old niece of Reverend Vernon Johns, a civil rights activist, led students who staged a walkout protesting the conditions. The NAACP took up their case when the students agreed to petition for an integrated school rather than improved conditions at their black school. This vote passed by one count. Howard University-trained attorneys Spotswood W. Robinson and Oliver Hill filed suit against the county school system on behalf of the students. As in other southern states, since the turn of the century, black voters in Virginia had been largely disfranchised, which resulted in their lacking political power.

In Davis v. County School Board of Prince Edward County, a state court rejected the suit, agreeing with defense attorney T. Justin Moore that Virginia was vigorously equalizing conditions in black and white schools. The state verdict was appealed to the U.S. District Court, which ruled for the plaintiffs, a decision the school district and the state appealed. Subsequently, it was one of five cases incorporated into Brown v. Board of Education, the landmark case in which the US Supreme Court in 1954 ruled that segregated public schools were unconstitutional.

In 1956, the Virginia General Assembly passed a series of laws (the Stanley plan) to implement Massive Resistance, a policy promoted by the Byrd Organization led by former Virginia governor and U.S. Senator Harry F. Byrd, to avoid compliance with the Supreme Court ruling in Brown and its direction to integrate public schools.

The state legislature (overwhelmingly dominated by whites since disfranchisement of African Americans in the state in the early 1900s) created a program of "tuition grants," which could be given to students so they could attend a private school of their choice. In practice, this meant state support of all-white schools that were developed as a way to evade integration of public schools. These newly formed schools became known as the "segregation academies".

As a result of the Brown decision, and changes in Virginia laws, in 1959 the Board of Supervisors for Prince Edward County refused to appropriate any funds at all for the County School Board. It effectively closed all public schools rather than integrate them. Prince Edward County Public Schools remained closed for five years. While other Virginia and some southern school systems resisted integration, Prince Edward County was the only school district in the country to resort to such extreme measures.

During the interruption in access to Prince Edward County's public schools, white parents established the Prince Edward Foundation. It founded a series of private schools restricted to white children. These schools were supported by the tuition grants from the state and tax credits from the county. Collectively they became known as "Prince Edward Academy", one of Virginia's "segregation academies". Prince Edward Academy operated as the de facto school system and enrolled K-12 students at a number of facilities throughout the county.

From 1959 to 1964, black students in Prince Edward County had to go to school elsewhere or forgo their education altogether. Some got schooling by living with relatives in nearby communities or at makeshift schools the community created in church basements. Others were educated out of state with funds raised by groups such as the Society of Friends (Quakers). In the final year (1963–1964), the NAACP-sponsored Prince Edward Free School picked up some of the slack by educating some of the black youth who had been unable to leave the county to attend public schools elsewhere.

In 1963, federal district courts ordered the public schools to open; Prince Edward County appealed to the U.S. Supreme Court. Ruling in Griffin v. County School Board of Prince Edward County, the Court unanimously agreed in May 1964 that Prince Edward County's actions violated the Equal Protection Clause of the 14th Amendment. At that point, county and state supervisors gave in rather than risk prosecution and prison, ending the era of Massive Resistance in Virginia.

The same summer, following the Griffith ruling, 16 students from Queens College (New York) ventured south to Prince Edward County during their “Student Help Project” Program, a precursor to the 1964 Mississippi Freedom Summer. The students served as teachers to the many African-American children who had been denied an education. These volunteers worked with the students to prepare them to resume classes when schools reopened that fall. The volunteers from Queens College were housed among leading African-American families in the county that summer. They used local churches as school houses during the week. Many of the students involved in the program have since donated their archives to the Queens College Department of Special Collections and Archives.

Even after the re-opening of the public schools, Prince Edward Academy remained segregated. Many of the segregation academies in Virginia eventually closed; others changed their missions and eliminated discriminatory policies. Some yielded on integration only after the Internal Revenue Service (IRS) revoked the tax-free status of non-profit discriminatory private schools. Prince Edward Academy was one of the latter and lost its tax-exempt status in 1978. In 1986, the school began to accept all students regardless of race or ethnicity. It was renamed the Fuqua School in 1992.

The former R.R. Moton High School building in Farmville has been recognized as a nationally significant community landmark. In 1998, it was designated a National Historic Landmark. It now houses the Robert Russa Moton Museum, a center for the study of civil rights in education.

According to the U.S. Census Bureau, the county has a total area of 354 square miles (920 km2), of which 350 square miles (910 km2) is land and 3.9 square miles (10 km2) (1.1%) is water. Most of the county's streams drain into the Appomattox River, a tributary of the James River, but in the southeastern corner of the county, streams drain via the Nottoway River into the Chowan River and thence into Albemarle Sound in North Carolina. The highest point in the county is the top of Leighs Mountain at 714 feet above sea level.

Unemployment accounted for 10.3 percent in Prince Edward County compared to 7.2 in all of Virginia.

Prince Edward County Public Schools operates the following schools, all located on the same multi-school campus in the Town of Farmville:

Also located within the multi-school campus is the Prince Edward County Career & Technical Education Center, offering a range of specialized courses, such as business law, carpentry, agriculture and automotive technology.

The Fuqua School, member of the Virginia Association of Independent Schools, is the primary K-12 alternative to the public schools for Prince Edward County. It, like each of the county's public schools, is located in Farmville.

Longwood University, the third-oldest public university in Virginia, is located in Farmville.

All content from Kiddle encyclopedia articles (including the article images and facts) can be freely used under Attribution-ShareAlike license, unless stated otherwise. Cite this article:
Prince Edward County, Virginia Facts for Kids. Kiddle Encyclopedia.