Farmville is a town in Prince Edward and Cumberland counties in the U.S. state of Virginia. The population was 8,216 at the 2010 census. It is the county seat of Prince Edward County.

The Appomattox River traverses Farmville, along with the High Bridge Trail State Park, a more than 30-mile-long (48 km) rail trail park. At the intersection of US 15, VA 45 and US 460, Farmville is the home of Longwood University and is the town nearest to Hampden–Sydney College.

Near the headwaters of the Appomattox River, the town of Farmville was formed in 1798 and incorporated in 1912.

Farmville was the end of the line for the Upper Appomattox Canal Navigation System between 1795 until 1890. African Americans built the canal system. Tobacco and farm produce could be loaded into a James River bateau in Farmville and sent to Petersburg, Virginia. The canals were used until railroads became common. Many of the boatmen who worked in the Upper Appomattox Navigation, near Farmville were free people of color, who lived in the Israel Hill community. Israel Hill was home to free African American laborers, craftsmen and farmers freed around 1810, and White people. People of African and European descent worked for the same wages; built a church together and could be defended in court within the 350 acre town.

John Flournoy was the first to mine coal near Farmville. He started in 1833 working on a seam, which was two feet thick. In 1837 the General Assembly granted a charter to “The Prince Edward Coal Mining Company” to mine and sell coal. This company was still in operation into the 1880s.

Another coal pit in the 1880s was worked on the W.W. Jackson property. The coal from this small pit was used to fuel his blacksmith shop on the same property." Farmville has coal deposits because it sits on the Farmville Basin, one of the Eastern North America Rift Basins west of modern day, Virginia State Route 45. 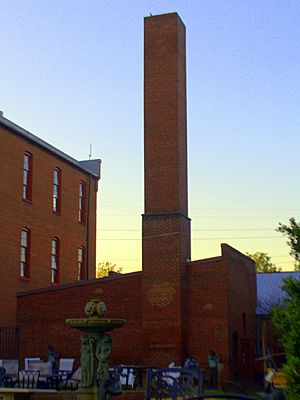 Farmville Station - 1882 Train Station near the Junction of the Southern Railway and the Farmville and Powhatan Railroad at First and Mill streets.

In the 1850s, the Southside Railroad from Petersburg to Lynchburg was built through Farmville between Burkeville and Pamplin City. The route, which was subsidized by a contribution from Farmville, required an expensive crossing of the Appomattox River slightly downstream, which became known as the High Bridge.

The Virginia General Assembly chartered the Piedmont Coal Company for John Dalby in 1860. The mine was near Buckingham Plank Road, Virginia State Route 600 in Cumberland, a mile and a half west of Raines Tavern, Virginia.

Without rail transportation close to Raines Tavern, the transportation cost of getting the coal to Farmville and then by rail to Richmond was too high to sell it at a competitive price. The coal was sold locally to people in the area for heating their homes.

During the American Civil War, the mines continued to operate but then production fell off. Coal was still there, though, Daddow and Bannon documented seven or eight coal seams and anthracite in 1866. 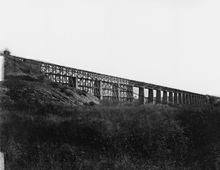 Robert E. Lee retreated through Farmville as he escaped the Union Army in the Civil War. Farmville was the object of the Confederate Army's desperate push to get rations to feed its soldiers near the end of the American Civil War. The rations had originally been destined for Danville, but an alert quartermaster ordered the train back to Farmville. Despite an advance of the cavalry commanded by Fitzhugh Lee, the Confederate Army was checked by the arrival of Union cavalry commanded by Gen. Philip Sheridan and two divisions of infantry. General Robert E. Lee's Army of Northern Virginia found itself soon surrounded. He surrendered at Appomattox Court House on April 9, 1865.

The Prince Edward county seat was moved from Worsham to Farmville in 1871.

Rail Transport from Cumberland County helped Cumberland farmers sell fruits, vegetables and timber to Farmville markets. From 1884 to 1917, the Farmville and Powhatan Railroad, later named the Tidewater and Western Railroad, was important to Cumberland County residents for markets and transportation and the telegraph. The owners hoped that the line could ship products all the way to the end of the line in Chester, Virginia and docks in the Tidewater region to make the railroad profitable. The line had trouble competing with the Standard gauge Southern railway.

Coal to Ship over Rails

It was rumored that the coal near Farmville would draw the Orange & Keysville Railway which was chartered, graded and the right of way was purchased, between Farmville and Hampden Sydney. The rails were never laid down, however. The coal field was idle until 1891 when the Farmville Coal and Iron Company began leasing land, selling stock and reopened the Piedmont mines. The company built a one and a half mile spur rail line from the Farmville and Powhatan Railroad to the mine. This railroad provided transport from the mine to the docks at Bermuda Hundred in the Tidewater region. On Jan. 24, 1891, an editor of “The Financial Mining Record” suggested that the The Farmville Coal & Iron Company, did not have enough coal production to justify a fraction of its stock price. The Norfolk and Western Railway, since 1883, had been bringing in coal from a new coal mine. The Pocahontas Coalfield which could provide coal more cheaply and ship the coal on a larger standard gauge, class one railroad. This decreased to the economic viability of mining coal in the Richmond and Farmville Basins. The Farmville Coal and Iron Company went bankrupt a few years later, possibly before any coal was mined.

The Farmville Coal & Iron Company did bring positive change. They requested that the town build a electric power plant and a waterworks. Designation of the powerplant was established in 1890 and the water works were designated in 1893. 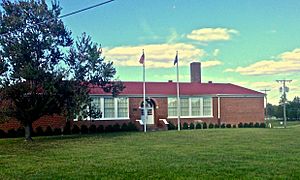 Farmville and Prince Edward County Public Schools were the source of Davis v. County School Board of Prince Edward County (1952–54), a case incorporated into Brown v. Board of Education (1954), the landmark case that overturned school segregation in the United States. Among the cases consolidated into the Brown decision, the Davis case was the only one involving student protests.

R.R. Moton High School, an all-black school in Farmville named for Robert Russa Moton, suffered from terrible conditions due to underfunding by white officials in the segregated state. The school did not have a gymnasium, cafeteria, or teachers' restrooms. Teachers and students did not have desks or blackboards, and due to overcrowding, some students had to take classes in a school bus parked outside. The school's requests for additional funds were denied by the all-white school board. Students had protested against the poor conditions.

As a result of the Brown decision, in 1959 the Board of Supervisors for Prince Edward County refused to appropriate any funds for the County School Board; in massive resistance, it effectively closed all public schools rather than integrate them. Wealthy white students usually attended all-white private schools called segregation academies that formed in response. Black and poorer white students had to go to school elsewhere or forgo their education altogether. Prince Edward County's public schools remained closed for ten years. When they finally reopened, the system was fully integrated.

Prince Edward Academy was the longest-surviving of the segregation academies, still teaching students in the 1990s. Although technically integrated at that point, the school had few students of color. Prince Edward Academy was renamed the Fuqua School in honor of J.B. Fuqua, a wealthy businessman who was raised nearby and who has endowed the school.

The former R.R. Moton High School building has been recognized as a community landmark. In 1998, it was designated as a National Historic Landmark for its significance to the Civil Rights Movement. It houses the Robert Russa Moton Museum, a center for the study of civil rights in education. In 2015, Longwood University and Moton Museum entered into a formal affiliation to advance understanding of the history of the struggle for civil rights.

Farmville is a growing community mainly because of economic growth in the Lynchburg and Richmond areas; many residents use Farmville as a bedroom community to take advantage of the low cost of living. Many Longwood alumni are staying in the community after growing up elsewhere.

Farmville made headlines in September 2015 after being selected by the Commission on Presidential Debates to host the 2016 vice-presidential debate. The debate was held at Longwood University on October 4, 2016.

The town is crossed by the High Bridge Trail State Park which extends 4 miles (6 km) east to the historic High Bridge.

Farmville is located in northern Prince Edward County, with the town center situated south of the Appomattox River. A portion of the town extends north across the river into Cumberland County.

The climate in this area is characterized by hot, humid summers and generally mild to cool winters. According to the Köppen Climate Classification system, Farmville has a humid subtropical climate, abbreviated "Cfa" on climate maps.

There were 2,634 households out of which 19.7% had children under the age of 18 living with them, 26.0% were husband-wife couples living together, 3.5% had a male householder with no wife present, 14.6% had a female householder with no husband present, and 55.9% were non-families. 49.2% of all households were made up of individuals and 26.9% had someone living alone who was 65 years of age or older. The average household size was 2.18 and the average family size was 2.90.

The Heart of Virginia Festival happens in Farmville the first weekend in May and has grown every year since it was established in 1978. "Heart of Virginia" refers to Farmville's location in the central part of the state. (The actual geographic center of the state is 20 miles (32 km) north at the intersection of Route 24 and 60 outside of Dillwyn in Buckingham County). The festival includes all the traditional fare and concludes with a fireworks show at the Farmville airport.

First Fridays, held on the first Friday of every month from May to September, features bands and family events at Riverside Park.

All content from Kiddle encyclopedia articles (including the article images and facts) can be freely used under Attribution-ShareAlike license, unless stated otherwise. Cite this article:
Farmville, Virginia Facts for Kids. Kiddle Encyclopedia.