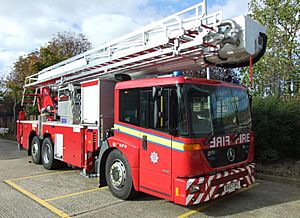 A fire engine from London

A fire engine is a vehicle that is designed to help in fighting fires by taking firefighters to the scene and giving them access to the fire, water or other equipment.

The first modern fire engine was invented in 1905 by Knox Automobile in Springfield, Massachusetts. 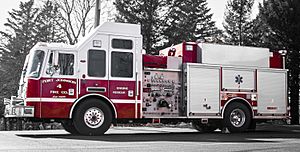 An example of an engine, which can be identified in part by the pump panel on the side. Compartments in the rear hold essential tools for different types of emergency calls, and the apparatus often holds a reserve of water as well. This truck contains about 1,000 gallons of water.

The standard fire engine is an apparatus designed primarily for firefighting operations. The primary purpose of the engine is transporting firefighters to the scene, providing a limited supply of water with which to fight the fire, and carrying tools, equipment, and hoses needed by the firefighters. The tools carried on the fire engine will vary greatly based on many factors including the size of the department and what sort of terrain the department must handle. For example, departments located near large bodies of water or rivers are likely to have some sort of water rescue equipment. Standard tools found on nearly all fire engines include ladders, hydraulic rescue tools (often referred to as the jaws of life), floodlights, fire hose, fire extinguishers, self-contained breathing apparatus, and thermal imaging cameras.

The exact layout of what is carried on an engine is decided by the needs of the department. For example, fire departments which cover metropolitan areas are more likely to assist with non-fire-related cases such as hazardous material removal/cleanup and technical rescues of people from traffic collisions or structural collapses, while rural departments may need to do things like access remote areas or extinguish forest fires. 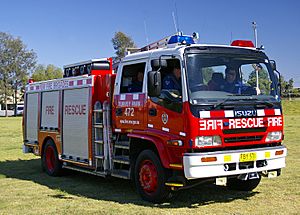 Some fire engines have a fixed deluge gun, also known as a master stream, which directs a heavy stream of water to wherever the operator points it. An additional feature of engines are their preconnected hose lines, commonly referred to as preconnects. The preconnects are attached to the engine's onboard water supply and allow firefighters to quickly mount an aggressive attack on the fire as soon as they arrive on scene. When the onboard water supply runs out, the engine is connected to more permanent sources such as fire hydrants or water tenders and can also use natural sources such as rivers or reservoirs by drafting water.

A turntable ladder (TL) is perhaps the best-known form of special purpose aerial apparatus, and is used to gain access to fires occurring at height using a large telescopic ladder, where conventional ladders carried on conventional appliances might not reach. The name is derived from the fact that the large ladder is mounted on a turntable on the back of a truck chassis, allowing it to pivot around a stable base. To increase its length, the ladder is telescopic. Modern telescopic ladders are either hydraulic or pneumatic. These mechanical features allow the use of ladders which are longer, sturdier, and more stable. They may also have pre-attached hoses or other equipment.

A ladder can also be mounted behind the cab. This is sometimes called "mid-ship" and the arrangement allows a lower travel height for the truck, and also can be more stable in certain conditions. 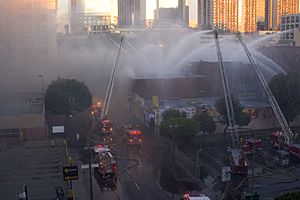 Several aerial apparatus in use at a fire in Los Angeles

The key functions of a turntable ladder are:

While the traditional characteristic of a fire appliance was a lack of water pumping or storage, many modern TLs have a water pumping function built in (and some have their own on-board supply reservoir), and may have a pre-piped waterway running the length of the ladder which directs a stream of water to the firefighters at the top. In some cases, there may also be a monitor at the top of the ladder for ease of use. Other appliances may simply have a track-way which will hold a manually-run hose reel securely, and prevent it from falling to the ground.

In the United States, some turntable ladders with additional functions such as an onboard pump, a water tank, fire hose, aerial ladder and multiple ground ladders, are known as quad or quint engines, indicating the number of functions they perform.

The highest TL in the world is Magirus M68L. with range 68 meters.

In the United States, a tiller truck, also known as a tractor-drawn aerial, tiller ladder, or hook-and-ladder truck, is a specialized turntable ladder mounted on a semi-trailer truck. Unlike a commercial semi, the trailer and tractor are permanently combined and special tools are required to separate them. It has two drivers, with separate steering wheels for front and rear wheels.

One of the main features of the tiller-truck is its enhanced maneuverability. The independent steering of the front and back wheels allow the tiller to make much sharper turns, which is particularly helpful on narrow streets and in apartment complexes with maze-like roads. An additional feature of the tiller-truck is that its overall length, over 50 feet (15 m) for most models, allows for additional storage of tools and equipment. The extreme length gives compartment capacities that range between 500 and 650 cubic feet (14 and 18 m3) in the trailer with an additional 40 and 60 cubic feet (1.1 and 1.7 m3) in the cab.

Some departments elect to use tiller-quints (see quint below), which are tiller trucks that have the added feature of being fitted with an on-board water tank. These are particularly useful for smaller departments that do not have enough personnel to staff both an engine company and a truck company. 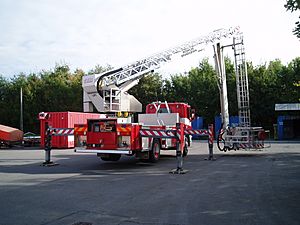 Some aerials have a platform, also known as a basket or bucket, mounted at the top of the ladder. These are commonly known as platform trucks. These platforms can provide a secure place from which a firefighter can operate. Many platforms also allow for rescues to be performed and are outfitted with tie down clips and rappelling arms.

There are also platform trucks that do not have a ladder attached to the platform. These specialized elevated work platforms are capable of articulating which allows the arm to bend in one or more places. This is an advantage over the traditional platform ladder, which can only extend in a straight line and gives the articulating platform the ability to go "up and over" an obstacle (see picture). 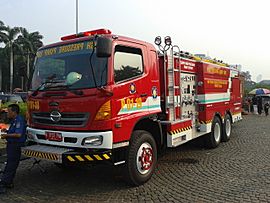 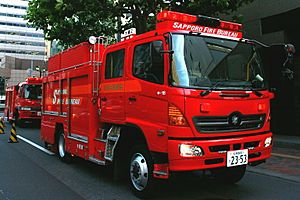 Heavy rescue vehicle with the Fire Bureau in Sapporo, Japan

In addition to fire and rescue departments, tram or railway companies may have their own dedicated heavy rescue squads. For example, railway rescue squads may carry very specialized equipment, for railway accidents, like hydraulic jacks with capacity for lifting locomotives or even moving them horizontally, and equipment for tank car accidents.

Wildland firefighting requires vehicles that can easily negotiate difficult terrain and high-gradient roads, be self-reliant, and have high clearances for wheels and suspension. These wildland fire engines are traditionally smaller than standard fire apparatus and are primarily used for vegetation fires or wildland fires. They may also respond to emergencies in rough terrain where other vehicles cannot respond. Most wildland engines feature four-wheel drive capability to improve hill climbing and rough terrain capability. Some wildland apparatus can pump water while driving (compared to some traditional engines which must be stationary to pump water), allowing "running attacks" on vegetation fires to minimize the rate of spread.

Fire departments that serve areas along the wildland–urban interface are faced with unique challenges that departments based in larger cities or strictly rural areas do not need to worry about. Departments in these areas often elect to use a type of fire engine commonly referred to as a wildland-urban interface engine or simply interface engines. While technically considered a wildland fire engine by many, these maintain the traditional look and feel of a standard engine.

All content from Kiddle encyclopedia articles (including the article images and facts) can be freely used under Attribution-ShareAlike license, unless stated otherwise. Cite this article:
Fire engine Facts for Kids. Kiddle Encyclopedia.