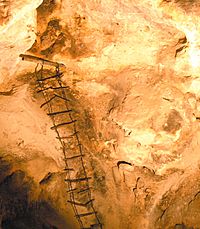 Old ladder inside a cave

A ladder is a tool which is made for people to climb up or down. Ladders have two vertical supports that go along the whole length of the ladder. Between these supports are the horizontal rungs. The rung is what the climber can put his foot on. The climber can use his hands to hold on to the rungs above him, or to the supports at the side.

Ladders can be made of metal, wood or even rope. There are different types of ladders.

Some ladders are made in one piece. They can be carried around and made to lean against something such as the wall of a house. There should be a good distance between the bottom of the ladder and the wall so that the ladder is not too vertical, otherwise the ladder might fall backwards and the climber would fall off. Sometimes these ladders are extension ladders. Extension ladders are made in two or more sections so that the ladder can fold up to make it easier to carry about and to store. To open up the ladder, each section slides up almost to the top of the next section.

Step ladders are useful in the home or the garden to reach things that are not too high, e.g. ceilings or the tops of hedges. They have two parts which are joined together by a hinge, so that they are shaped like an upside down V. There is usually a platform at the top to stand on, but this can be dangerous unless great care is taken that the ladder will not wobble or fall down.

Some ladders are vertical (they go straight up or down). These are fixed onto something. Examples are: ladders in a swimming pool for climbing in and out of the water, small ladders to climb up to a top bunk bed, ladders at the side of a big boat or at the side of a canal lock or of any other high or low construction where workmen may need to get up or down to do repairs.

A fire engine with a turntable ladder in Tokyo.

Fire engines always have ladders. They often have a turntable ladder which makes it possible for the ladder to be facing in any direction.

Rope ladders can be folded away easily. They may be used for climbing trees or for rock climbing or in caves.

All content from Kiddle encyclopedia articles (including the article images and facts) can be freely used under Attribution-ShareAlike license, unless stated otherwise. Cite this article:
Ladder Facts for Kids. Kiddle Encyclopedia.