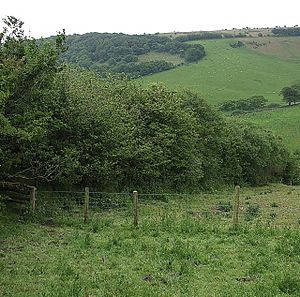 Old, thick hedge at the side of a field 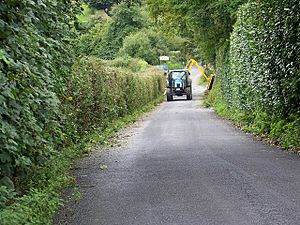 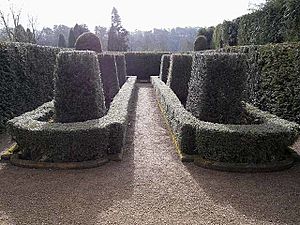 A hedge or hedgerow is a close-knit row of shrubs and sometimes tree species. They were usually planted and "trained" to form a barrier. They marked the boundary of an area, and so were a sign of possession.

Livestock farmers use them to prevent cattle straying out of fields. Animals which cannot usually be contained in fields (hill sheep for example) need a man and dog to look after them, which is an expense. Hedges were much more common before modern agriculture. Modern crop farming uses machines to gather the crop, and so hedges have all but disappeared in some areas.

When hedges are first laid, they are usually all of one species. But over hundreds of years, the number of species in a hedge gradually increases, and often includes fully-grown trees. There are many hedges in Europe which have been there for 500 or a thousand years.

Making hedges into ornaments is a skill called topiary. Sometimes, hedges are made into mazes.

Hedges are vitally important to small birds and mammals. In the modern world they play the role which thick forest undergrowth would have played in an ancient ecology. The nests in a hedge or thicket often cannot be got at by larger predators.

All content from Kiddle encyclopedia articles (including the article images and facts) can be freely used under Attribution-ShareAlike license, unless stated otherwise. Cite this article:
Hedge Facts for Kids. Kiddle Encyclopedia.