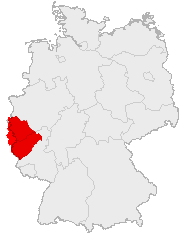 Location of the Eifel 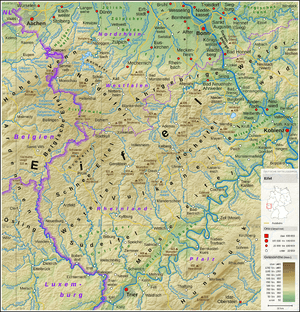 Map of the Eifel 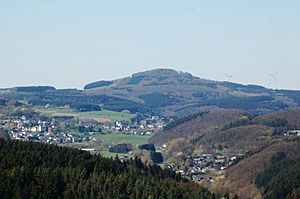 Eifel landscape: the Ernstberg and surroundings

The very eastern part of Belgium (the High Fens and most of the German-speaking Community of Belgium) and the northern part of Luxembourg (the Oesling) are considered to be both parts of the Ardennes and parts of the Eifel.

Few people live in the mountain range. It has many trees, reservoirs and rivers.

The biggest settlement is the city of Aachen at the northern edge.

Because of its elevation, temperatures are low.

The Eifel is divided into:

Languages spoken in the Eifel are German, and in the Belgian and Luxembourgian parts besides German also French.

Three Central Franconian dialects of German are spoken in the Eifel:

All content from Kiddle encyclopedia articles (including the article images and facts) can be freely used under Attribution-ShareAlike license, unless stated otherwise. Cite this article:
Eifel Facts for Kids. Kiddle Encyclopedia.