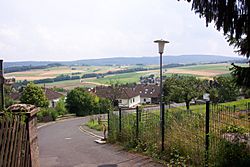 A typical view of the Hunsrück countryside.

The Hunsrück is a low mountain range in Rhineland-Palatinate, Germany.

Many of the hills are not higher than 400 m. But there are several chains of higher peaks within the Hunsrück, all bearing names on their own: the (Schwarzwälder) Hochwald, the Idarwald, the Soonwald, and the Binger Wald. The highest peak is the Erbeskopf (816 m).

Towns in the Hunsrück include Simmern, Kirchberg, and Idar-Oberstein, Kastellaun, and Morbach. Frankfurt-Hahn Airport, a growing low-fare carrier and cargo airport is there as well.

The climate in the Hunsrück is characterised by rainy weather. Slate is mined in the mountains.

The German TV drama trilogy Heimat, directed by Edgar Reitz, examined the 20th-century life of a small fictional village in the Hunsrück.

All content from Kiddle encyclopedia articles (including the article images and facts) can be freely used under Attribution-ShareAlike license, unless stated otherwise. Cite this article:
Hunsrück Facts for Kids. Kiddle Encyclopedia.