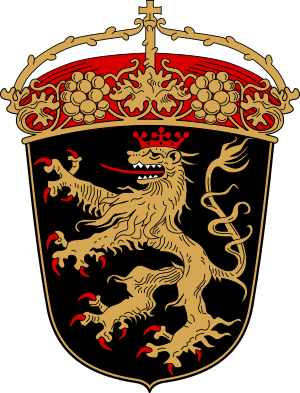 The Palatinate (German: die Pfalz; Pfälzer dialect: Palz), historically also Rhenish Palatinate (German: Rheinpfalz), is a region in southwestern Germany. It occupies roughly the southernmost quarter of the German federal state of Rhineland-Palatinate (Rheinland-Pfalz), covering an area of 5,451 square kilometres (2,105 sq mi) with about 1.4 million inhabitants. Its residents are known as Palatines. 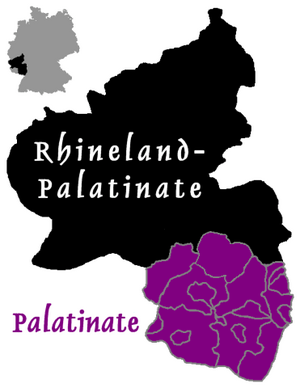 Location in the State of Rhineland-Palatinate

The Palatinate borders on Saarland in the west, historically also comprising the state's Saarpfalz District. In the northwest, the Hunsrück mountain range forms the border with the Rhineland region. The eastern border with Hesse and the Baden region runs along the Upper Rhine river, while the left bank, with Mainz and Worms as well as the Selz basin around Alzey, belong to the Rhenish Hesse region. In the south, the German-French border separates the Palatinate from Alsace.

The western and northern part of the Palatinate is densely forested and mountainous. Its highest mountain is the Donnersberg with a height of 687 m (2,254 ft), situated in the North Palatine Uplands near Kirchheimbolanden. Most of the major Palatinate towns (Ludwigshafen, Speyer, Landau, Frankenthal, Neustadt) lie in the lower eastern part of the Upper Rhine Plain down to the River Rhine. Here the German Wine Route (Deutsche Weinstraße) passes through the Palatinate wine region. It is one of the greatest wine-producing regions in Germany, and in the last two decades has become well known for its numerous prizewinning white and reds of highest quality produced by a number of talented young winemakers. 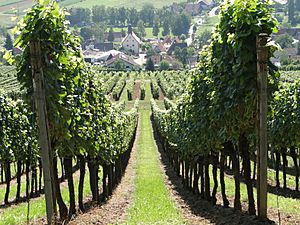 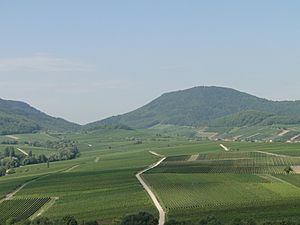 Typical vineyard landscape in front of the Palatinate Forest 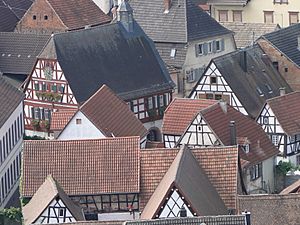 Major rivers include the Upper Rhine tributaries Lauter, Queich and Speyerbach, as well as Schwarzbach and Glan in the west.

Historically the Electoral Palatinate and several other territories were part of the Palatinate, but today belong to other German territories. 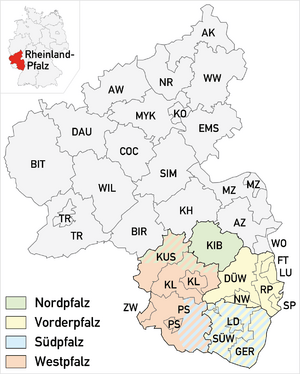 Administrative divisions of the Palatinate (German)

The Palatinate is divided into four non-administrative sub-regions, comprising the following rural districts and independent towns and cities: 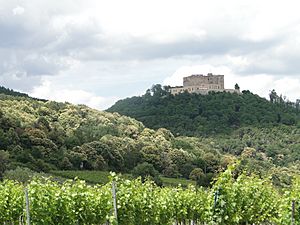 Like most of Europe, the Palatinate is part of the oceanic climate zone influenced by the Atlantic, with an average annual temperature of about 10 degrees Celsius. Wet air from the prevailing westerly and southwesterly winds leads to precipitation in the Mittelgebirge ranges, while it warms up on its way further down to the Rhine Valley. Here the temperate weather permits the cultivating of almond and fig trees, stone pines, Mediterranean Cypress, palms, and even some banana species. The lower hilly regions are known for their extended chestnut forests, sometimes referred to as "German Tuscany" in tourist advertising.

Formerly a Celtic region, this area was conquered by the Roman Empire under Emperor Augustus in about 12 BCE, whereafter it was part of the Germania Superior province. During the decay of the Empire, Alamanni tribes settled here; their territory was conquered by Francia under King Clovis I about 496. From 511 onwards the area belonged to the eastern part of Frankish Austrasia, that—as Rhenish Franconia—became part of East Francia according to the 843 Treaty of Verdun.

From the Middle Ages until 1792, the Palatinate was divided into 45 secular and ecclesiastical territories, some of which were very small. The largest and most important of these was the Electorate of the Palatinate (Kurpfalz), a number of Franconian territories on both sides of the Rhine formerly held by the Counts palatine (Pfalzgrafen) of Lotharingia. By the late 12th century, the Count palatine had achieved the status of a Prince-elector (Kurfürst), becoming one of the seven higher nobles with the privilege of electing the Emperor, as confirmed by the Golden Bull of 1356. In 1214 the Bavarian House of Wittelsbach was enfeoffed with these estates, which they ruled until 1918, together with the collateral branch of Palatinate-Zweibrücken from 1410. They lost control with the reunification with Bavaria under Elector Charles Theodore in 1777.

The major ecclesiastical territory in the region was the Bishopric of Speyer. The Imperial city of Landau joined the Alsacien Décapole in 1521 to preserve its status. Nevertheless, it was seized by France after the Thirty Years' War.

Other larger regional entities included the Duchy of Zweibrücken and the Prince-Bishopric of Speyer. The Prince-Bishopric held possessions on both sides of the Rhine. For centuries, the Electoral Palatinate and Bavaria maintained dynastic links because both were ruled by members of the Wittelsbach family.

In 1794 the Left Bank of the Rhine, including the Palatinate, was occupied by French revolutionary troops. As a result of the Treaty of Campo Formio (1797), the First French Republic annexed the region. In 1798 they introduced a new administrative system with the establishment of departments. Basically, the area of the Palatinate became the Département of Mont Tonnerre, laying the cornerstone of its regional identity today. Minor parts of today's region belonged to the neighbouring departments of Sarre and Bas-Rhin. The French further subdivided the department into cantons, mayoralties and municipalities, and introduced their legal system (Napoleonic Code) and the metric system.

Following the defeat of Napoleon at the Battle of Leipzig in 1813, and the capture of the Left Bank of the Rhine by the Allies in January 1814; from 2 February 1814, the region was initially under the provisional authority of the General Government of the Middle Rhine, but, from 16 June of the same year, it was placed under the administration of the Imperial-Royal ("k.k.") Austrian and Royal Bavarian Joint Land Administration Commission.

In the main treaty agreed at the Congress of Vienna in 1815, and dated 9 June 1815, Article 51 stated that (inter alia), on the Left Bank of the Rhine the former French departements of the Sarre and Mont Tonnerre, except where set forth in the same treaty, were to fall "with full sovereignty" and ownership rights within the overlordship of His Majesty the Emperor of Austria (Herrschaft Sr. Maj. des Kaisers von Oesterreich). Initially, however, joint Austro-Bavarian administration was retained.

On 14 April 1816 a treaty was signed between Austria and Bavaria, in which the various territorial changes were agreed on. According to Article 2 of the treaty, Emperor Francis I of Austria ceded various regions to King Maximilian I of Bavaria.

The Bavarian Royal Family tried to encourage Palatine unity with Bavaria by erecting a royal palace in Edenkoben, and through the restoration of Speyer Cathedral under the direct supervision of King Ludwig I himself. The new town of Ludwigshafen was named after the king. Despite these attempts, the Palatinate's representatives to the Bavarian Parliament always prided themselves on the claim that they came from a more progressive region. Indeed, they tried to promote their liberalism, which the French had introduced to the Palatinate, to the whole Bavarian kingdom. German historian Heiner Haan described the special status accorded the Palatinate within Bavaria as being one of a Hauptstaat (main state, i.e. Bavaria) with a Nebenstaat (alongside state, i.e. the Palatinate).

In May/June 1849, after the failed revolution of 1848, and as part of the Imperial Constitution campaign, separatist elements wanted the district to secede from Bavaria and establish its own "Palatine Republic". A separatist uprising was suppressed by Prussian military intervention. The Palatinate's union with Bavaria persisted after it became part of the German Empire in 1871, and, indeed, after the Wittelsbach dynasty was deposed, and Bavaria became a free state of the Weimar Republic in 1918. In 1910 the town of Landau was declared independent from the Bezirksamt.

After World War I, French troops occupied the Palatinate under the terms of the Treaty of Versailles. In 1920 the western Bezirksämter of Sankt Ingbert and Homburg (Saarpfalz) were separated from the Bavarian Palatinate, and became part of the newly established Saarland which, according to the peace treaty, was governed by the League of Nations. That same year, seven more towns were declared independent from the Bezirksämter: Speyer, Ludwigshafen, Frankenthal, Neustadt an der Weinstraße, Kaiserslautern, Pirmasens, and Zweibrücken. They remain independent to this day.

Between 1919 and 1923, during the occupation, there were French-backed attempts at separating the Palatinate from Bavaria and the Empire. On 1 June 1919, Eberhard Haaß, founder of the “Free Palatine Association” (1918), proclaimed the “Palatine Republic”, but failed to occupy the government building in Speyer.

On 23 November 1923, Franz Josef Heinz proclaimed the "Government of the Autonomous Palatinate in the Association of the Rhenish Republic" at Speyer, after gaining control of the towns of Kaiserslautern, Neustadt, and Landau, and after the capitulation of the Palatine government. In the following days, several more towns fell into his group's hands. The Bavarian government reacted sharply. It organised a squad under the command of Edgar Julius Jung. On 9 January 1924, Heinz was assassinated while dining at the Wittelsbacher Hof in Speyer. Other leading members of the separatist movement were killed on 12 February, in a shooting in Pirmasens. By then, a treaty between Bavaria and the Inter-Allied Rhineland High Commission (the supreme council of the Allied occupation forces) of January 1924 recognised the status quo and guaranteed that the Palatinate would remain a part of Bavaria, thereby putting an end to separatist attempts.

Under Nazi rule, from 1933 to 1945, the Palatinate officially remained part of Bavaria, but was otherwise totally reorganised–it was merged with the Saarland into the Gau Westmark, with headquarters in Saarbrücken.

The union with Bavaria was finally dissolved following the reorganisation of German states during the Allied occupation of Germany after World War II. While Bavaria itself was part of the U.S. occupation zone, the Palatinate was occupied by French forces. The French reorganised their occupation zone by founding new states, so that in 1947 the Palatinate was combined with Rhenish Hesse (Rheinhessen), the former parts of the People's State of Hesse left of the Rhine, and the southern part of the Prussian Rhine Province, to form the German federal state of Rhineland-Palatinate. The Palatinate formed the administrative district (Regierungsbezirk) Pfalz. This reorganisation came with smaller losses of former district territory to the Saarland, especially in the area of Sankt Wendel. As part of the 1969 administrative reform, some minor border changes were made in the north. The Diocese of Speyer and the Evangelical Church of the Palatinate still exist today largely based on the historic boundaries of the old Bavarian district of die Pfalz. 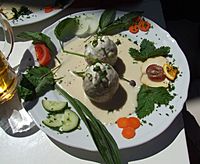 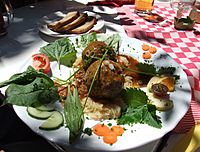 The Pennsylvania Dutch language spoken by the Amish in the United States is derived primarily from the Palatine German language which many Mennonite refugees brought to Pennsylvania in the years 1717 to 1732. The only existing Pennsylvania German newspaper, Hiwwe wie Driwwe, was founded 1996 in the village of Ober-Olm, which is located close to Mainz, the state capital (and is published bi-annually as a cooperation project with Kutztown University). In the same village one can find the headquarters of the German-Pennsylvanian Association.

Many more Palatines emigrated in the course of the 19th century, and the great majority of them to North America, so that in the US temporarily "Palatine" was a common designation for German Americans. Johann Heinrich Heinz (1811-1891), the father of Henry John Heinz who founded the H. J. Heinz Company in Pittsburgh, Pennsylvania, emigrated from Kallstadt, Palatinate, to the United States in 1840. Friedrich Trump, the grandfather of Donald Trump, was also born in Kallstadt and emigrated to New York City in 1885. He later married Elisabeth Christ, a former neighbor's daughter from Kallstadt.

Arguably the most famous dish in Palatinate is the saumagen, literally "sow's stomach", a dish that consists of a thick, crispy-fried casing (sow stomach) stuffed with a mixture of pork, potatoes, and seasonings. Other traditional meat dishes of the region include bratwurst, Palatinate liverwurst, a blood pudding sausage called grieweworscht ("griewe" are speck (bacon) cubes, so lit. "sausage with bacon bits"), lewwerknedel (Leberknödel) (or lewwerknepp, liver dumplings), and fleeschknepp (Fleischknödel: meat dumplings). Sauerkraut is the typical side dish in all seasons, but especially in winter, as are mashed potatoes and brown gravy. Also eaten are dampfnudels, which can be served with either sweet sauces or side dishes (such as wine, vanilla sauce or canned fruit such as plums, prunes, or pears) or with savory side dishes (such as potato soup, vegetable soup, goulash, or pepper pork).

All content from Kiddle encyclopedia articles (including the article images and facts) can be freely used under Attribution-ShareAlike license, unless stated otherwise. Cite this article:
Palatinate (region) Facts for Kids. Kiddle Encyclopedia.