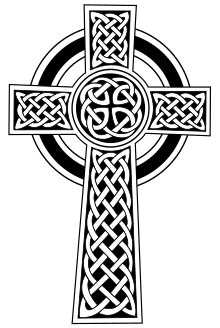 The Celts were a large group of Caucasian tribes in Europe. They first appeared in the early Iron Age, around 1200 B.C. in Austria. It's an interesting fact that the name 'Celt' comes from the Romans, and in fact, the Celts would never have used that word themselves.They came from the Hallstatt and La Tène cultures. Their culture and genes spread through much of Europe, and by the time the Greeks and later the Romans started emerging, the British Isles and parts of western, southern and eastern Europe were Celtic - the most prominent Celtic tribes were in Gaul. The Celts spoke Celtic languages. Today, the Celtic languages that remain are the Breton, Cornish, Welsh and Gaelic languages.

Celtic society and technology, although not as advanced as the Romans, was far from being primitive for its time. The Celts lived a way of life based on ethical codes and honor codes and had developed a culture of their own, full of unique drawings, sculptures, jewellery, folklore, and building designs and techniques. They were also skilled in blacksmithing, farming and diplomacy.

Celtic warriors would wear war paint and try to scare their enemies by shouting war cries. Tribes had different dress standards for battle; some warriors wore chainmail and/or leather armor, some wore only clothes and some were known to fight fully naked. They also had their own type of sword that was very strong and a shield that was very protective.

When the Roman Republic started expanding, the Gauls and the Romans became very hostile towards each other and clashed on many occasions; however, the Romans were eventually able to defeat them and ended up conquering most of the Celtic tribes in Europe and ruled them until the fall of the Roman Empire. Celtic tribes also fought amongst each other. After winning a battle, the Celts would cut off the heads of their enemies and take them home.

During the fall of the Roman Empire most of the old Celtic land ended up being ruled by migrating Germanic tribes and they merged with Romano-Celtic stock (people with both Roman and Celtic ancestry) to eventually form several European nations of today e.g. France. Territories that are still considered Celtic are Ireland, Wales, Scotland, Isle of Man, Cornwall and Brittany. 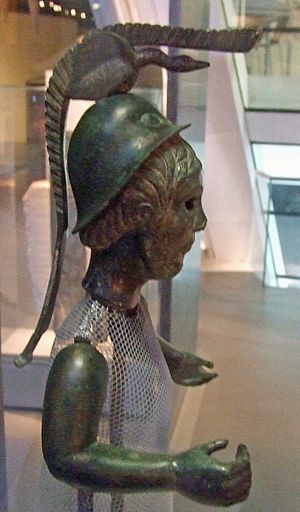 To the extent that sources are available, they depict a pre-Christian Celtic social structure based formally on class and kinship. Patron-client relationships similar to those of Roman society are also described by Caesar and others in the Gaul of the first century BCE.

In the main, the evidence is of tribes being led by kings, although some argue that there is evidence of oligarchical republican forms of government eventually emerging in areas in close contact with Rome. Most descriptions of Celtic societies describe them as being divided into three groups: a warrior aristocracy; an intellectual class including professions such as druid, poet, and jurist; and everyone else. There are instances recorded where women participated both in warfare and in kingship, although they were in the minority in these areas. In historical times, the offices of high and low kings in Ireland and Scotland were filled by election under the system of tanistry, which eventually came into conflict with the feudal principle of primogeniture where the succession goes to the first born son.

Warfare appears to have been a regular feature of Celtic societies. While epic literature depicts this as more of a sport focused on raids and hunting rather than organised territorial conquest, the historical record is more of tribes using warfare to extert political control and harrass rivals, for economic advantage, and in some instances to conquor territory.

Patterns of settlement varied from decentralised to the urban. The popular stereotype of non-urbanised societies settled in hillforts and duns, drawn from Britain and Ireland contrasts with the urban settlements present in the core Hallstatt and La Tene areas, with the many significant oppida of Gaul late in the first millenium BCE, and with the towns of Gallia Cisalpina.

There is archeological evidence to suggest that the pre-Roman Celtic societies were tied into the network of overland trade routes that spanned Eurasia from Ireland to China. Celtic traders were also in contact with the Phoenicians: gold works made in Pre-Roman Ireland have been unearthed in archeological digs in Palestine, and trade routes between Atlantic societies and Palestine date back to at least 1600 BC.

Local trade was largely in the form of barter, but as with most tribal societies they probably had a reciprocal economy in which goods and other services are not exchanged, but are given on the basis of mutual relationships and the obligations of kinship. Low value coinages of potin, silver and bronze, suitable for use in trade, were minted in most Celtic areas of the continent, and in South-East Britain prior to the Roman conquest of these areas.

There are only very limited records from pre-Christian times written in Celtic languages. These are mostly inscriptions in the Roman, and sometimes Greek, alphabets. The Ogham script was mostly used in early Christian times in Ireland and Scotland, and was only used for ceremonial purposes such as inscriptions on gravestones. The available evidence is of a strong oral tradition, such as that preserved by bards in Ireland, and eventually recorded by monasteries. The oldest recorded rhyming poetry in the world is of Irish origin and is a transcription of a much older epic poem, leading some scholars to claim that the Celts invented Rhyme. They were highly skilled in visual arts and Celtic art produced a great deal of intricate and beautiful metalwork, examples of which have been preserved by their distinctive burial rites.

In some regards the Atlantic Celts were conservative, for example they still used chariots in combat long after they had been reduced to ceremonial roles by the Greeks and Romans, though when faced with the Romans in Britain, their chariot tactics defeated the invasion attempted by Julius Caesar. 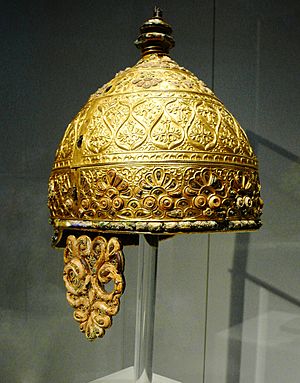 Ceremonial Agris Helmet, 350 BC, Angoulême city Museum in France, with stylistic borrowings from around the Mediterranean
Main page: Celtic polytheism

Although Celtic gods varied from region to region and tribe to tribe, the Celtic religion had some patterns. For example like Mediterranean cultures most early Celts worshipped in sacred groves. This was once postulated to have occurred because of Celts trading with Mediterranean cultures; however, evidence from Hallstatt era finds show that the earliest Celts practiced this before such trade took place. More reasonably, it is a byproduct of most primitive religion to worship in such a way. However, La Tène Celts also built temples of varying size and shape, though they still usually maintained sacred trees, or votive pools. Worship was, in this way, deferred to temples, when they were available. Numerous temples were converted by the Romans, and with little difficulty; the design was rather similar to Roman temples, as they were both highly influenced by the Greeks, architecturally speaking.

Their druid positions vary; a druid is not always a priest. Druids are any members of a Celtic society who had what we would view today as a college education. The most educated druids were usually doctors, priests, and heralds, as these occupations required the most memorization and skill for their practices. Priests from this class were in charge of a great deal of religious festivals, as well as organizing the calendar; a daunting task as the Celtic calendar is incredibly accurate, but required manual correction about every 40 years, meaning lengthy mathematic discourse.

Druids also carried out sacrifices of crops, animals, and during specific festivals, humans. In a Celtic society, people were not executed for crimes, except during these festivals. Such executions varied, depending on what god the execution was dedicated to. Among the most famous is the human sacrifices practiced in the course of Essus worship. Essus was, more or less, a benevolent law god to many Celts, particularly Gauls. However, Essus worship also intoned a sense of merciless behavior toward repeated criminals. The offender, if found guilty, would be taken to the temple of Essus and killed.

The Celts' gods were often named after natural things. For example the source of rivers would often have their own goddesses, though rarely many gods. Another theme with Celt gods were triple deities; not only goddesses, but numerous gods. For example the Mothers of Britain, or Cromm Cruach's slovenly, deific, and humanistic forms. The main deities of Celtic religion, contrary to much misconception, were usually male. The world in some remaining myths is often depicted as having been forged by a god with a hammer, such as Dagda or Sucellos, who then poured all life from a magic cauldron or cup; a source of pre-Christian 'Holy Grail' myths in Celtic societies.

While deities varied, several constant deities or demigods existed over a wide area. A great example is Lugos, a heroic sun god from Gaul and the southern, Gallic parts of Britain. He is also known as Lugh (in Ireland), Lleu (in Wales), and Lug (among Celtiberians, who were not culturally true Celts). Early depictions of him exist as early as the Hallstatt era, suggesting him as one of the longest existing gods of Celtic religion. Similar is the horse and fertility goddess, Epona, who was also worshipped by the Romans when they came to rule Gaul. She also seems to have existed from the early era. Finally, there is Sucellos, who is argued by some to have been the 'creator of the universe' in some Celtic religions. He is party to Dagda of Ireland, and was worshipped over an enormous area, including by non-Celtic peoples such as the Lusitani. He was the patron god of the Ordovices tribe of Britain, and was built up by the Arverni and their allies to replace the druidic god Cernunnos, as the Gallic druids were allies of their enemies in the rule for Gaul; the Aedui.

Other religious practices also existed; Celts seem to have universally removed body hair. Some postulate this as religious, but was more realistically part of the Celtic propensity for cleanliness. Body hair kept dirt close to the body, and Celts were an extremely clean people, so this was unacceptable. However, Celts also took heads from dead enemies. This was definitely a religious practice in origin. However, even post-Christian Gaels continued this practice into the middle ages; some Irish even took to scalping the heads that they took, so they could braid the scalp through rings on their weapons. The religious connotations by that point were slim, but it does imply that taking heads had incredible cultural importance to have persisted so long after the religious background had been removed. To our understanding, Celts believed the soul resided in the head, and that capturing a head meant that one captured the soul of an opponent, and that when a Celt died, the dead whom he had collected would serve him as slaves for eternity. There is no proof of this.

All content from Kiddle encyclopedia articles (including the article images and facts) can be freely used under Attribution-ShareAlike license, unless stated otherwise. Cite this article:
Celts Facts for Kids. Kiddle Encyclopedia.