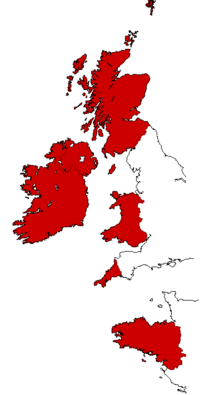 The countries of the six Celtic languages still spoken.

The Celtic languages are a language family inside of Indo-European languages. There are six Celtic languages still spoken in the world today, spoken in north-west Europe. They are divided into two groups, Goidelic (or Gaelic) and the Brythonic (or British).

The three Brythonic languages are Welsh, Cornish, and Breton. Of these Cornish became extinct in the 18th century but people have started speaking it again now. Welsh is spoken everywhere throughout Wales, but is mainly first language for people in the western part of Wales, in the area some people call the Bro Gymraeg. Breton is spoken mainly in west Brittany, and is the only Celtic language not mainly spoken on the islands of Great Britain and Ireland. Because Brittany is part of France, the language is in danger of becoming extinct, just like Cornish, and there are ongoing efforts to prevent this from happening.

Scottish Gaelic also has a native community of speakers in Canada where it was once very widely spoken, and there are Welsh speakers in Patagonia, Argentina.

All content from Kiddle encyclopedia articles (including the article images and facts) can be freely used under Attribution-ShareAlike license, unless stated otherwise. Cite this article:
Celtic languages Facts for Kids. Kiddle Encyclopedia.