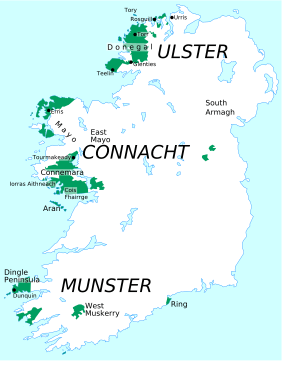 The regions in Ireland where most people speak Gaelic as their first language are marked in green. 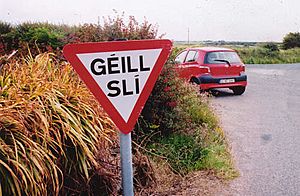 this sign reads Give way (or yield). It is in County Waterford, in Ireland

At the time of the 2006 census of the Republic of Ireland, the population of the Gaeltacht was 91,862, about 2.1% of the state's 4,239,848 people. The main concentrations of Irish speakers are in the western counties of Donegal, Mayo, Galway, Kerry, and Cork. But in Gaeltacht electoral districts the percentage of Irish speakers is much higher.

All content from Kiddle encyclopedia articles (including the article images and facts) can be freely used under Attribution-ShareAlike license, unless stated otherwise. Cite this article:
Gaeltacht Facts for Kids. Kiddle Encyclopedia.