County Kerry (Irish: Contae Chiarraí) is a county in Ireland. It is located in the South-West Region and is also part of the province of Munster. It is named after the Ciarraige who lived in part of the present county. Kerry County Council is the local authority for the county and Tralee serves as the county town. The population of the county was 147,554 in 2016, according to the 2016 census.

Kerry is the fifth-largest of the 32 counties of Ireland by area and the 15th-largest by population. It is the second-largest of Munster's six counties by area, and the fourth-largest by population. Uniquely, it is bordered by only two other counties: County Limerick to the east and County Cork to the south-east. The county town is Tralee. The diocesan see is Killarney, which is one of Ireland's most famous tourist destinations. The Lakes of Killarney, an area of outstanding natural beauty are located in Killarney National Park. The tip of the Dingle Peninsula is the most westerly point of Ireland.

There are nine historic baronies in the county. While baronies continue to be officially defined units, they are no longer used for many administrative purposes. Their official status is illustrated by Placenames Orders made since 2003, where official Irish names of baronies are listed under "Administrative units". 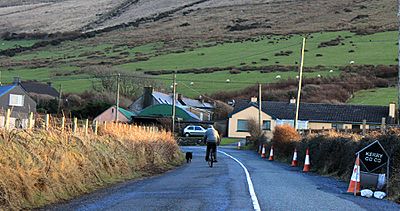 Kerry faces the Atlantic Ocean and, typically for an Eastern-Atlantic coastal region, features many peninsulas and inlets, principally the Dingle Peninsula, the Iveragh Peninsula, and the Beara Peninsula. The county is bounded on the west by the Atlantic Ocean and on the north by the River Shannon. Kerry is one of the most mountainous regions of Ireland and contains two of its three highest mountains, Carrauntoohil, part of the Macgillycuddy's Reeks range, and Mount Brandon, part of the Slieve Mish range.

Just off the coast are a number of islands, including the Blasket Islands, Valentia Island and the Skelligs. Skellig Michael is a World Heritage Site, famous for the medieval monastery clinging to the island's cliffs. The county contains the extreme west point of Ireland, Dunmore Head on the Dingle Peninsula, or including islands, Tearaght Island, part of the Blaskets. The most westerly inhabited area of Ireland is Dún Chaoin, on the Dingle Peninsula. The River Feale, the River Laune and the Roughty River flow through Kerry, into the Atlantic.

Kerry (Irish: Ciarraí or more anciently Ciarraighe) means the "people of Ciar" which was the name of the pre-Gaelic tribe who lived in part of the present county. The legendary founder of the tribe was Ciar, son of Fergus mac Róich. In Old Irish "Ciar" meant black or dark brown, and the word continues in use in modern Irish as an adjective describing a dark complexion. The suffix raighe, meaning people/tribe, is found in various -ry place names in Ireland, such as Osry—Osraighe Deer-People/Tribe. The county's nickname is the Kingdom.

On 27 August 1329, by Letters Patent, Maurice FitzGerald, 1st Earl of Desmond was confirmed in the feudal seniority of the entire county palatine of Kerry, to him and his heirs male, to hold of the Crown by the service of one knight's fee. In the 15th century, the majority of the area now known as County Kerry was still part of the County Desmond, the west Munster seat of the Earl of Desmond, a branch of the Hiberno-Norman FitzGerald dynasty, known as the Geraldines. 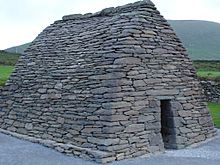 Gallarus Oratory near Dingle, which dates back to the 6th century. 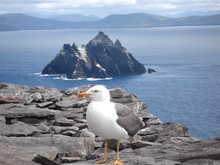 In 1580, during the Second Desmond Rebellion, one of the most infamous massacres of the Sixteenth century, the Siege of Smerwick, took place at Dún an Óir near Ard na Caithne (Smerwick) at the tip of the Dingle Peninsula. The 600-strong Italian, Spanish and Irish papal invasion force of James Fitzmaurice Fitzgerald was besieged by the English forces and massacred.

In 1588, when the fleet of the Spanish Armada in Ireland were returning to Spain during stormy weather, many of its ships sought shelter at the Blasket Islands and some were wrecked.

During the Nine Years' War, Kerry was again the scene of conflict, as the O'Sullivan Beare clan joined the rebellion. In 1602 their castle at Dunboy was besieged and taken by English troops. Donal O'Sullivan Beare, in an effort to escape English retribution and to reach his allies in Ulster, marched all the clan's members and dependants to the north of Ireland. Due to harassment by hostile forces and freezing weather, very few of the 1,000 O'Sullivans who set out reached their destination.

In the aftermath of the War, much of the native owned land in Kerry was confiscated and given to English settlers or 'planters'. The head of the MacCarthy Mor family, Florence MacCarthy was imprisoned in London and his lands were divided between his relatives and colonists from England, such as the Browne family.

In the 1640s Kerry was engulfed by the Irish Rebellion of 1641, an attempt by Irish Catholics to take power in the Protestant Kingdom of Ireland. The rebellion in Kerry was led by Donagh McCarthy, 1st Viscount Muskerry. McCarthy held the county during the subsequent Irish Confederate Wars and his forces were among the last to surrender to the Cromwellian conquest of Ireland in 1652. The last stronghold to fall was Ross Castle, near Killarney.

In the 17th and 18th centuries Kerry became increasingly populated by poor tenant farmers, who came to rely on the potato as their main food source. As a result, when the potato crop failed in 1845, Kerry was very hard hit by the Great Irish Famine of 1845–49. In the wake of the famine, many thousands of poor farmers emigrated to seek a better life in America and elsewhere. Kerry was to remain a source of emigration until recent times. Another long term consequence of the famine was the Land War of the 1870s and 1880s, in which tenant farmers agitated, sometimes violently for better terms from their landlords.

War of Independence and Civil War 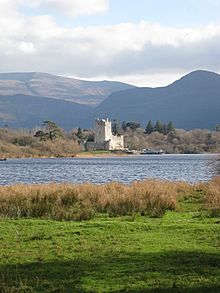 In the 20th century, Kerry was one of the counties most affected by the Irish War of Independence (1919–21) and Irish Civil War (1922–23). In the war of Independence, the Irish Republican Army fought a guerilla war against the Royal Irish Constabulary, and British military. One of the more prominent incidents in the conflict in Kerry was the "siege of Tralee" in November 1920, when the Black and Tans placed Tralee under curfew for a week, burned many homes, and shot dead a number of local people in retaliation for the IRA killing of five local policemen the night before. Another was the Headford Junction ambush in spring 1921, when IRA units ambushed a train carrying British soldiers outside Killarney. About ten British soldiers, three civilians and two IRA men were killed in the ensuing gun battle. Violence between the IRA and the British was ended in July 1921, but nine men, four British soldiers and five IRA men, were killed in a shoot-out in Castleisland on the day of the truce itself, indicating the bitterness of the conflict in Kerry.

Following the Anglo-Irish Treaty, most of the Kerry IRA units opposed the settlement. One exception existed in Listowel where a pro-Treaty garrison was established by local Flying Column commandant Thomas Kennelly in February 1922. This unit consisted of 200 regular soldiers along with officers and NCOs. A batch of rifles, machine guns and a Crossley tender were sent from Dublin. Listowel would remain a base for those supporting the treaty throughout the conflict. The town was eventually overcome by superior numbers of anti-Treaty forces belonging to the Kerry No. 2 and 3 Brigades in June 1922. In the ensuing civil war between pro- and anti-treaty elements, Kerry was perhaps the worst affected area of Ireland. Initially the county was held by the Anti-Treaty IRA but it was taken for the Irish Free State after seaborne landings by National Army troops at Fenit, Tarbert and Kenmare in August 1922. Thereafter the county saw a bitter guerilla war between men who had been comrades only a year previously. The republicans, or "irregulars", mounted a number of successful actions, for example attacking and briefly re-taking Kenmare in September 1922. In March 1923 Kerry saw a series of massacres of republican prisoners by National Army soldiers, in reprisal for the ambush of their men—the most notorious being the killing of eight men with mines at Ballyseedy, near Tralee. The internecine conflict was brought to an end in May 1923 as the rule of law was re-established following the death of IRA Chief of Staff Liam Lynch, and the order by Frank Aiken to dump all arms.

As a region on the extremity of Ireland, the culture of Kerry was less susceptible to outside influences and has preserved the Irish language, as well as Irish traditional music, song and dance. The Sliabh Luachra area of northeast Kerry, that borders Limerick and Cork, is renowned for its traditional music, dance and song, especially its slides, polkas and fiddle playing. The Siamsa Tíre centre in Tralee is a hub of traditional Irish pastimes. Corca Dhuibhne and Uíbh Ráthach are considered Gaeltacht regions and Irish culture is also very strong in these areas.

The Blasket Islands off the Dingle Peninsula are known for their rich literary heritage; authors such as Peig Sayers, Muiris Ó Suilleabhain and Tomás Ó Críomhthain have all written books about life on the islands, which were evacuated in 1953. John B Keane, a native of Listowel, is considered one of Ireland's greatest playwrights and is known for his works such as The Field, Sive and Big Maggie. The annual Listowel Writers' Week Festival serves as a celebration of Irish writers past and present. 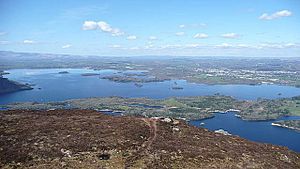 Kerry, with its mountains, lakes and Atlantic coastline is among the most scenic areas in Ireland and is among the most significant tourist destinations in Ireland. Killarney is the centre of the tourism industry, which is a significant element of the economy in Kerry. The Kerry Way, Dingle Way and Beara Way are walking routes in the county. The Ring of Kerry on the Iveragh Peninsula is a popular route for tourists and cyclists. The pedestrian version is the scenic Kerry Way which follows ancient paths generally higher than that adopted by the Ring of Kerry.

The area was also home to the Hiberno-Norman families, the FitzMaurices and the Desmonds, a branch of the FitzGeralds.

Viscount Valentia appears to have been associated with lands in County Armagh, rather than Kerry.

All content from Kiddle encyclopedia articles (including the article images and facts) can be freely used under Attribution-ShareAlike license, unless stated otherwise. Cite this article:
County Kerry Facts for Kids. Kiddle Encyclopedia.