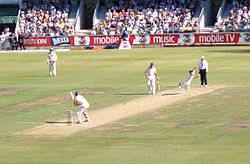 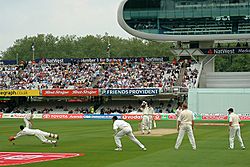 Note wicket-keeper on left. England vs New Zealand at Lords, the home of cricket 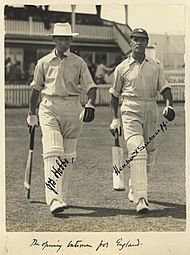 Hobbs and Sutcliffe walking out to bat against Australia, Brisbane 1928 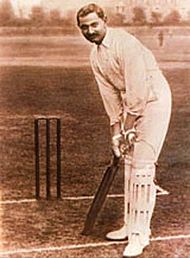 Ranji (Ranjitsinhji Vibhaji, Maharaja Jam Sahib of Nawanagar) was the first great Indian player. He played for England 1896–1902, and was an officer in the British Army in World War I 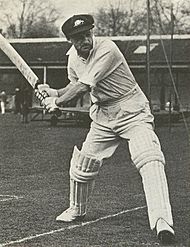 The great Don Bradman (Australia) in practice, 1930s/1940s. His batting average is the all-time best

Cricket is a sport which is played between two teams of eleven players each. One team, which is batting, tries to score runs , while the other team is fielding, and tries to prevent this. Runs are scored by hitting the ball, which is thrown by a player from the fielding team to a player from the batting team, across the boundary, or by the batting team's players running between two areas of the field called the batsmen's grounds as many times as possible before the fielding team successfully hits a wicket (set of sticks) in either of the grounds with the ball to get them out.

The wickets are sets of three small, wooden posts that are at each end of a rectangle of short grass called 'the pitch', which is 22 yards long. The pitch is inside a much larger oval of grass called the 'area of play'. The area of play is a 30 yard circle inside the cricket ground or stadium. When a player is out, a teammate will replace them in the field. When a team no longer has enough "not-out" players left to score, then the other team gets the chance to try to score. In shorter games of cricket, a team may also have to stop batting when the ball has been thrown to their players a certain number of times. After both teams have had enough chances to score, the team with the most runs wins.

The game started in England in the 16th century. The earliest definite reference to the sport is in a court case of 1598. The court in Guildford heard a coroner, John Derrick, that when he was a scholar at the "Free School at Guildford", fifty years earlier, "he and diverse of his fellows did run and play [on the common land] at cricket and other players". Later, the game spread to countries of the British Empire in the 19th and 20th centuries.

Today, it is a popular sport in England, Australia, India, Pakistan, Sri Lanka, Bangladesh, South Africa, New Zealand, the West Indies and several other countries such as Afghanistan, Ireland, Kenya, Scotland, the Netherlands, and Zimbabwe.

There are two teams: The team bowling has 11 players on the field. The team batting has two players, one at each end of the pitch (also sometimes called the wicket).

The captain of the bowling team chooses a bowler from his team; the other players are called 'fielders'.

The bowler runs towards his wicket, and bowls towards the batsman at the other wicket.

The batsman is trying to defend the wicket from getting hit with the ball. He does this with a bat. When he hits the ball with his bat, he may run toward the other wicket.

There are different ways that a batsman can get out. The most common ways are:

When a batsman is out, another comes onto the field to take his place. The innings is over when ten wickets are taken (i.e. ten of the eleven batsmen are out). After this, the team which was the 'fielding' team becomes the 'batting' team. They now have to score more runs than the other team managed to score. If they score more runs before ten wickets are taken, they win. If they do not, the other team wins.

Where cricket is played

Cricket is popular in many countries, mostly in Commonwealth countries.

The countries where cricket is most popular compete in international matches (games between countries) that last up to 5 days, which are called Test matches. Those countries are England, Australia, West Indies, South Africa, New Zealand, India, Bangladesh, Zimbabwe, Ireland, Afghanistan and Sri Lanka. The West Indies are a group of Caribbean countries that play together as a team. Several other countries have more junior status. The test match idea was invented by teams from England and Australia in the 19th century.Ireland and Afghanistan are the new teams which can play Test cricket.

Cricket is also played in Kenya, Canada, Bermuda, Scotland, Holland and Namibia; the national teams of those countries can play one-day international matches, but do not play test matches. 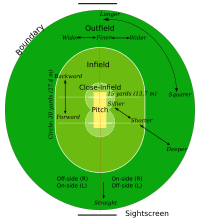 A standard cricket ground, showing the cricket pitch (brown), close-infield (light green) within 15 yards (13.7 m) of the striking batsman, infield (medium green) inside the white 30 yard (27.4 m) circle, and outfield (dark green), with sight screens beyond the boundary at either end.

A cricket field is where cricket is played. It is circular or oval-shaped grassy ground. There are no fixed dimensions for the field. Its diameter usually varies between 450 feet (137 m) to 500 feet (100 m).

Test matches are the top international matches played between countries. The main point of test cricket is to test young players. The countries permitted to play test matches are accredited by the ICC: the International Cricket Council. The ten countries are listed below, with 'West Indies','England' counting for this purpose as a country. Tests last for up to five days (This is why many also call it "5 day cricket.") and can still end in a draw match : it is the longest format of cricket.

Called counties in England, and states in Australia and islands in the West Indies. These are three or four day matches. 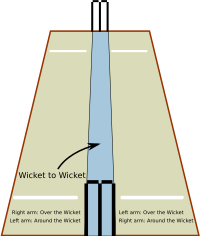 In these games, the length is determined by the number of overs, and each side has one innings only. A special formula, known as the 'Duckworth–Lewis method' is applied if rain reduces the time for play. It calculates the target score for the team batting second in a limited overs match interrupted by weather or other circumstance.

ODIs are usually restricted to 50 overs batting for each side and each bowler can bowl up to 10 overs maximum. The highest team score is England 481-6 against Australia in June 19, 2018. The highest individual score is 264 off 173 balls by Rohit Sharma for India against Sri Lanka.

Twenty20 cricket has 20 overs for each side and each bowler can bowl up to 4 overs maximum unlike 10 overs in an ODI match. The highest team score is 263/5 by Royal Challengers Bangalore (RCB) against Pune Warriors India (PWI) in the 2013 IPL season. The highest individual score is 175* off 69 balls by Chris Gayle for RCB in the same match.

In cricket there are two special kinds of average, used to measure how good a player is:

There is a separate set of averages for each type of cricket listed above.

All content from Kiddle encyclopedia articles (including the article images and facts) can be freely used under Attribution-ShareAlike license, unless stated otherwise. Cite this article:
Cricket Facts for Kids. Kiddle Encyclopedia.