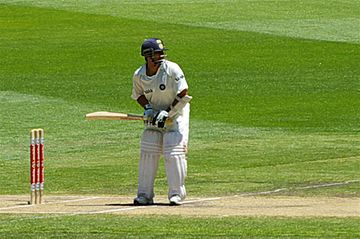 Indian cricketer Sachin Tendulkar is the only player to complete more than 30,000 runs in international cricket. Photo shows him getting ready to face a delivery.

In the sport of cricket, batting is the act or skill of hitting the cricket ball with a cricket bat. It is done to score runs or prevent the loss of one's wicket. Any player who is currently batting is called a batsman even if they are better in any other skills in cricket. Batsmen have to adapt to various conditions when playing on different cricket pitches, especially in different countries. A top-level batsman has good reflexes, decision-making and strategy with excellent physical batting skills.

During an innings two members of the batting side are on the pitch. The one facing the current delivery from the bowler is called 'the striker', while the other is the non-striker. When a batsman is out, he is replaced by a teammate. This continues until the end of the innings or until 10 of the team members are out. After the batting of first team is over the other team gets a turn to bat.

Batting tactics and strategy depends on the type of match being played. It also depends on the current state of play. Batsmen try to score many runs quickly without losing their wicket. To score quickly, risky shots must be played which increases the chances of batsman being out. Batsman's safest choice is to guard the stumps but this may result in scoring fewer runs.

As with all other cricket statistics, batting statistics and records are given much attention. It helps to know how effectively a batsman is playing. The main statistic for batting is a player's batting average. This is calculated by dividing the number of runs he has scored by the number of times he has been out (dismissed).

All content from Kiddle encyclopedia articles (including the article images and facts) can be freely used under Attribution-ShareAlike license, unless stated otherwise. Cite this article:
Batting (cricket) Facts for Kids. Kiddle Encyclopedia.