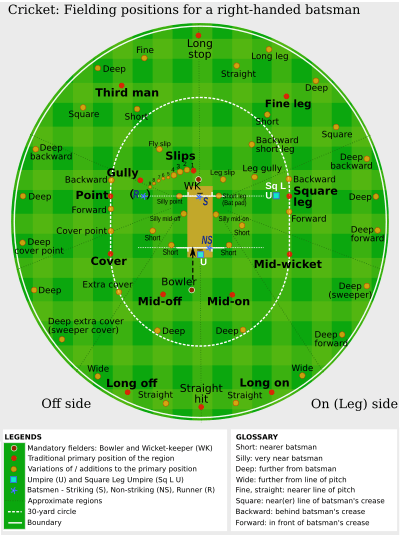 Fielding positions for a right-handed batter

Fielders can stand anywhere in the field, and there are many names for the different parts of the field they can stand in. Most of the names are based on what angle the fielder stands away from the batter (it also depends on whether the batter is left-handed or right-handed), and how far away they are from the batter.

Some common fielding positions are the wicketkeeper and the bowler.

All content from Kiddle encyclopedia articles (including the article images and facts) can be freely used under Attribution-ShareAlike license, unless stated otherwise. Cite this article:
Fielding (cricket) Facts for Kids. Kiddle Encyclopedia.