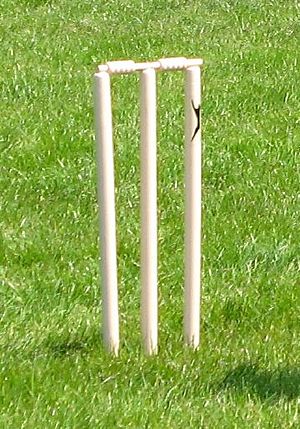 In cricket, a wicket is:

The wicket is said to have been "put down" when any of its 5 sticks fall to the ground because it was hit by the ball or a player holding the ball. The sticks can be put back in place and then hit back off to put the wicket down more than once.

Sides of the field

The field can be defined as having two halves: the "off side" and the "leg side"/"on side", with these being separated by an imaginary line connecting the middle stump of both wickets. The off side of the field is the right side of a field for a right-handed batsman who is looking at the bowler, and the leg side is the left side. (This is reversed for a left-handed batsman.)

A batsman is said to have "lost his wicket" when he gets out.

All content from Kiddle encyclopedia articles (including the article images and facts) can be freely used under Attribution-ShareAlike license, unless stated otherwise. Cite this article:
Wicket Facts for Kids. Kiddle Encyclopedia.