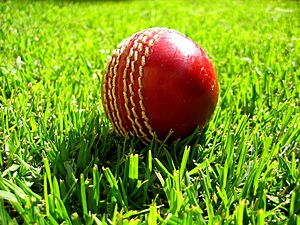 A cricket ball is a hard, solid ball used to play cricket.

Cricket balls are made from a core of cork, which is layered with tightly wound string, and covered by a leather case with a slightly raised sewn seam. The covering is constructed of four pieces of leather shaped similar to the peel of a quartered orange, but one hemisphere is rotated by 90 degrees with respect to the other. The "equator" of the ball is stitched with string to form the seam, with a total of six rows of stitches. The remaining two joins between the leather pieces are left unstitched.

Cricket balls are traditionally dyed red, and red balls are used in Test cricket and First-class cricket. White balls were introduced when one-day matches began being played at night under floodlights, as they are more visible at night. Many one-day matches are now played with white balls. Other colours have occasionally been experimented with, such as yellow and orange for improved night visibility, but the colouring process has so far rendered such balls unsuitable for professional play because they wear differently to standard balls.The white ball has been found to swing a lot more during the first half of the innings than the red ball. It also deteriorates faster than the red ball.

Condition of a cricket ball 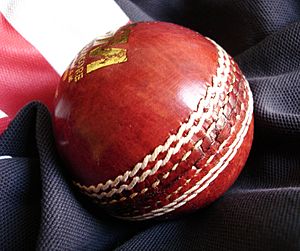 A new, highly polished ball is used at the start of each innings in a match. A cricket ball may not be replaced except under specific conditions described in the Laws of Cricket:

The ball is not replaced if it is hit into the crowd - the crowd must return it. If the ball is damaged, lost, or illegally modified, it will be replaced by a used ball in similar condition to the replaced ball. A new ball can only be used after the specified minimum number of overs have been bowled with the old one.

Because a single ball is used for an extended period of play, its surface wears down and becomes rough. The bowlers will polish it whenever they can - usually by rubbing it on their trousers, producing the characteristic red stain that can often be seen there. However, they will usually only polish one side of the ball, in order to create 'swing' as it travels through the air. They may apply natural substances (i.e. saliva or sweat) to the ball as they polish it, but any other material is illegal.

Since the condition of the cricket ball is crucial to the amount of movement through the air a bowler can produce, the laws governing what players may and may not do to the ball are specific and rigorously enforced. The umpires will inspect the ball frequently during a match. It is illegal for a player to:

Despite these rules, it can be tempting for players to gain an advantage by breaking them. There have been a handful of incidents of so-called ball tampering at the highest levels of cricket, involving players such as Pakistani fast bowler Waqar Younis and former England captain Mike Atherton.

A new cricket ball is harder than a worn one, and is preferred by fast bowlers because of the speed and bounce of the ball as it bounces off the pitch. Older balls tend to spin more as the roughness grips the pitch more when the ball bounces, so spin bowlers prefer to use a worn ball. Uneven wear on older balls may also make Reverse swing possible. A captain may delay the request for a new ball if he prefers to have his spin bowlers operating, but usually asks for the new ball soon after it becomes available. 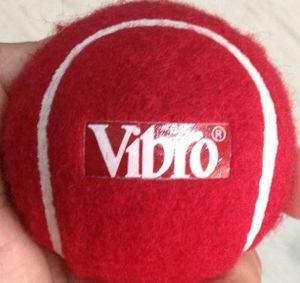 Sometimes alternatives to a real cricket ball may be preferred for reasons of safety, practice, availability and cost. Examples include a tennis ball (most favoured) or a plastic version of the cricket ball, also known as an Incrediball.

Many casual players use a tennis ball wrapped in layers of some type of adhesive tape (often electrical insulating tape), which makes the relatively soft tennis ball harder and smoother.

The world's first diamond cricket ball was made in Sri Lanka with 2704 diamonds and 18 carat (75%) gold for the seam. The material used to keep the diamonds on the ball is similar to the one used on the wings of NASA space shuttles.

All content from Kiddle encyclopedia articles (including the article images and facts) can be freely used under Attribution-ShareAlike license, unless stated otherwise. Cite this article:
Cricket ball Facts for Kids. Kiddle Encyclopedia.