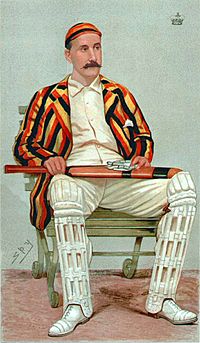 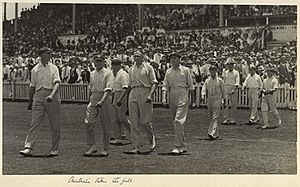 Test cricket is the longest and oldest type of international cricket. The first officially recognized Test match took place on 15–19 March 1877 and was played between England and Australia at the Melbourne Cricket Ground, where Australia won by 45 runs.

The early test matches were played by England against other sides in the British Empire. First test matches took place in these years:

Test matches eventually spread to other countries around the world. Later came One Day Internationals (ODIs) and Twenty20 internationals (T20s).

Test matches are a series of 5-day matches. Each team's two innings' scores are added to find the total runs. The team with more runs wins the match if the other team has completed both of their innings, with there being a tie if they have an equal number of runs; otherwise it is a draw.

All content from Kiddle encyclopedia articles (including the article images and facts) can be freely used under Attribution-ShareAlike license, unless stated otherwise. Cite this article:
Test cricket Facts for Kids. Kiddle Encyclopedia.