Leg before wicket facts for kids

Leg before wicket (LBW) is one way a batsman can get out in cricket. There must be an appeal to the umpire at the bowler's end, and he makes the decision.

LBW happens when the ball touches a batsman's body before it touches the bat or a hand/glove holding the bat, and the ball would otherwise have hit the wicket.

Leg before wicket first appeared in the laws of cricket in 1774, as batsmen began to use their pads to prevent the ball hitting their wicket. 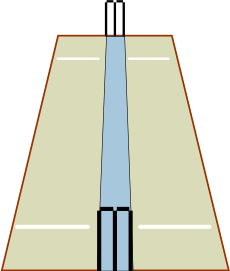 The definition of leg before wicket (lbw) is currently Law 36 in the Laws of Cricket, written by the Marylebone Cricket Club (MCC).

Before a batter can be dismissed lbw, the fielding team must appeal to the umpire. If the bowler delivers a no-ball — an illegal delivery — the batter cannot be out lbw under any circumstances.

Otherwise, for the batter to be adjudged lbw, the ball, if it bounces, must hit the pitch in line with or on the off side of the wickets. For a right-handed batsman, the off side is the right-hand side of the pitch when viewed from his perspective. For a left-handed batsman, the off side is the left-hand side. Then the ball must strike part of the batsman's body without first touching his/her bat, In the Laws of Cricket, the batsman's bat is considered to include the hand or hands holding it. in line with the wickets and have been going on to hit the stumps.

The batter may also be out lbw if, having made no attempt to hit the ball with their bat, they are struck outside the line of off stump by a ball that would have hit the wickets. The umpire must assume that the ball would have continued on the same trajectory after striking the batter, even if it would have bounced before hitting the stumps.

Sometimes video replay and other technologies are used to decide if a batter is out LBW. For example, heat-tracking ("Hot Spot") can visually show when the ball has hit the bat or part of the batter's body, audio-tracking ("Snickometer") can show if there is a slight sound from the impact of the ball, and advanced simulations ("Hawkeye") can predict where the ball would have gone after impact with the batter's body if the batter had not been there.

All content from Kiddle encyclopedia articles (including the article images and facts) can be freely used under Attribution-ShareAlike license, unless stated otherwise. Cite this article:
Leg before wicket Facts for Kids. Kiddle Encyclopedia.