She is the highest run-scorer in women's international cricket and the only female cricketer to surpass the 7,000 run mark in Women's One Day International matches. she is the first player to score seven consecutive 50s in ODIs. Raj also holds the record for most half-centuries in WODIs. In June 2018 during the 2018 Women's Twenty20 Asia Cup, she became the first player from India (either male or female) to score 2000 runs in T20Is, and also became the first woman cricketer to reach 2002 WT20I runs.

In 2005, she became the captain of the side. Raj is the only player (female) to have captained India in more than one ICC ODI World Cup final, doing so twice in 2005 and 2017. On 1 February 2019, during India's series against New Zealand Women, Raj became the first woman to play in 200 ODI matches. In September 2019, she announced her retirement from T20Is to focus on ODI cricket. In 2019, she became the first woman to complete 20 years in international cricket.

She is the recipient of several national and international awards, including the Wisden Leading Woman Cricketer in the World in 2017, Arjuna Award in 2003, and the Padma Shri in 2015, both by the Government of India.

Mithali Raj was born on 3 December 1982 in a Tamil family in Jodhpur, Rajasthan. Her father is Dorai Raj, who was an Airman (Warrant Officer) in the Indian Air Force, and mother is Leela Raj. Raj started to play the game at age of 10. She lives in Hyderabad, Telangana. She attended Keyes High School for Girls in Hyderabad. She attended Kasturba Gandhi Junior College for Women in Secunderabad for her intermediate studies. She started cricket coaching in her school days along with her elder brother.

Playing for Railways in the domestic competition, Raj began by playing with stars like Purnima Rau, Anjum Chopra and Anju Jain for Air India.

Mithali has played all three cricket formats for India, Test One Day and T20. She was named among the probables in the 1997 Women's Cricket World Cup when she was just 14, but couldn't make it to the final squad. She made her One Day International debut in 1999 against Ireland at Milton Keynes and scored unbeaten 114 runs. She made her Test debut in the 2001–02 season against South Africa at Lucknow. On 17 August 2002, at the age of 19, in her third Test, she broke Karen Rolton's record of world's highest individual Test score of 209*, scoring a new high of 214 against England in the second and final Test at County Ground, Taunton. The record has since been surpassed by Kiran Baluch of Pakistan who scored 242 against West Indies in March 2004.

Raj was ill with a strain of typhoid during the CricInfo Women's World Cup in 2002, seriously hampering India's progress. However, she then led them to their first World Cup final in 2005, in South Africa, where they met Australia who proved too strong.

In August 2006, she led the side to their first ever Test and Series victory in England and wrapped up the year winning the Asia Cup – the second time in 12 months – without dropping a single game.

She led the Indian team to the finals in the 2005 Women's Cricket World Cup where the team lost to Australia. She is a part-time leg-break bowler as well. She is a recipient of the Arjuna award for the year 2003. She currently tops the batting table with 703 ratings. Her composure when at the crease and ability to score briskly make her a dangerous cricketer. In addition to her ability with the bat, Raj rolls her arm over bowling leg-spinners and providing variety to the attack.

In February 2017, she became the second player to score 5,500 runs in WODIs. Raj is the first player to captain most matches for India in ODI and T20I.

In July 2017, she became the first player to score 6,000 runs in WODIs. She led the Indian team to the final of the 2017 Women's Cricket World Cup where the team lost to England by nine runs.

In December 2017, she was named as one of the players in the ICC Women's ODI Team of the Year.

In October 2018, she was named in India's squad for the 2018 ICC Women's World Twenty20 tournament in the West Indies.

In September 2019, Raj has retired from T20I Cricket. She dreams to bring the World Cup to her country by 2021. "After representing India in T20 internationals since 2006, I wish to retire from T20Is to focus my energies on readying myself for the 2021 one-day World Cup," she said in a BCCI press statement.

In November 2020, Raj was nominated for the Rachael Heyhoe-Flint Award for ICC Female Cricketer of the Decade, and the award for women's ODI cricketer of the decade.

Raj was appointed as a batting consultant for India women's national cricket team, and had played as a player-coach. 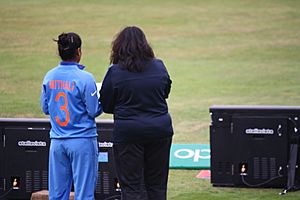 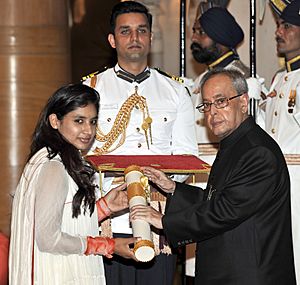 Besides cricket, Raj enjoys reading books. She is also a Bharatanatyam dancer.

All content from Kiddle encyclopedia articles (including the article images and facts) can be freely used under Attribution-ShareAlike license, unless stated otherwise. Cite this article:
Mithali Raj Facts for Kids. Kiddle Encyclopedia.