Charlotte Marie "Lottie" Edwards CBE (born 17 December 1979) is a former English professional cricketer who was captain of the England women's team. Edwards, who retired from international cricket in May 2016 and from all cricket in September 2017, was England's then youngest cricketer on her debut, and broke a world scoring record before her 18th birthday, one of many firsts in an international career of 20 years. Her leadership of the England team, from 2005, included successful Ashes series, and world titles in one-day and Twenty/20 formats of the game.

When she made her England debut in 1996, Edwards was the youngest player ever to play for England, a record she held until Holly Colvin was capped, aged 15, in 2005.

In 1997, she scored 12 centuries, including one off 118 balls against the touring South Africans. The day before her 18th birthday, she scored a then-record ODI score of 173 not out in a World Cup match against Ireland women's cricket team. In 1998–99, she scored her maiden Test hundred against India, but, while still scoring runs, her performances fell below expectations. In 2000, she was sidelined by a serious cruciate ligament injury sustained while playing hockey that caused her to miss most of the 2001 season.

In 2005, she stepped up from her role as England vice-captain to take full charge of the side while Clare Connor was injured, and was appointed full-time captain when Connor retired in March 2006. Edwards was also captaining her county Kent. 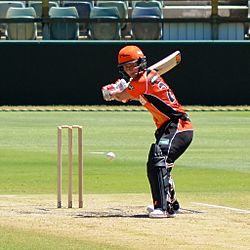 She played her 100th One-Day International on tour in Australia and led her team to victory in the one-off test match at Bowral to retain The Ashes, scoring 94 in England's first innings, and hitting the winning runs in the second.

She was awarded the ICC Woman's player of the year 2008 at the ICC awards in Dubai.

Edwards led the England team in the 2009 World Cup in Australia, scoring a half century and taking a career best 4 for 37 in the Super Six round victory over New Zealand, before captaining the side to a 4-wicket victory over the same opposition in the World Cup Final in Sydney.

She led the England team to victory at Lord's in the final of the World Twenty20 Championship in June 2009. She scored 139 runs in the tournament, the third highest total, and took 4 wickets at 14.5 apiece. Later that summer she recorded an unbeaten half century in the second innings to help England to retain The Ashes with a draw in the one-off Ashes test at New Road in Worcester.

On 17 November 2010, she won her 142nd One Day International cap when she captained England against Sri Lanka to break the world record of 141 ODI appearances held by Australia's Karen Rolton. Edwards took a career best 4 for 30 in the game. Clare Connor, the England and Wales Cricket Board's Head of Women's Cricket, praised Edwards' achievement, calling her "a credit to women's cricket globally, a superb role model for girls who aspire to play for their country".

She scored her first Ashes century in England's one-off Test against Australia at Bankstown Oval on 22 January 2010, finishing unbeaten on 114 from an England first innings total of 207 all out.

In 2014, Edwards was named as one of the five Wisden Cricketers of the Year. She was just the second English women's cricketer to be so honoured after Claire Taylor in 2009.

She was the holder of one of the first tranche of 18 ECB central contracts for women players.

Edwards' nicknames are "Lottie" and "Chief".

All content from Kiddle encyclopedia articles (including the article images and facts) can be freely used under Attribution-ShareAlike license, unless stated otherwise. Cite this article:
Charlotte Edwards Facts for Kids. Kiddle Encyclopedia.