Kids Encyclopedia Facts
This page is about the town in England. For other uses, see Huntingdon (disambiguation).

Huntingdon is a market town in Cambridgeshire, England. The town was chartered by King John in 1205. It is the traditional county town of Huntingdonshire, and is the seat of the Huntingdonshire district council. It is known as the birthplace of Oliver Cromwell, who was born in 1599 and was the member of parliament (MP) for the town in the 17th century. The former Conservative prime minister John Major was the MP for the town from 1979 to 2001.

Huntingdon was founded by the Anglo-Saxons and Danes. Mentioned in the Anglo-Saxon Chronicle, it seems that it was a staging post for Danish raids outside of east Anglia until 917, when the Danes relocated to Tempsford, before being crushed by Edward the Elder. It prospered successively as a bridging point of the River Great Ouse, as a market town, and in the 18th and 19th centuries as a coaching centre, most notably The George Hotel. The town has a well-preserved medieval bridge that used to serve as the main route of Ermine Street over the river. The bridge only ceased to be the sole crossing point to Godmanchester in 1975, with the advent of what is now the A14 bypass. 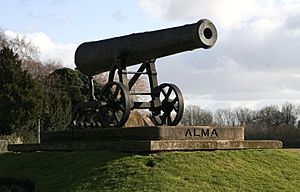 Its valuable trading position was secured by the now vanished Huntingdon Castle. The site is now a Scheduled Ancient Monument, and is home to a beacon used to commemorate the 400th anniversary of the Spanish Armada.

In 1746, the botanists Wood & Ingram of nearby Brampton developed a cultivar species of elm tree, Ulmus × hollandica 'Vegeta', which was named the "Huntingdon Elm" after the town.

Original historical documents relating to Huntingdon, including the borough charter of 1205, are held by Cambridgeshire Archives and Local Studies at the County Record Office Huntingdon. 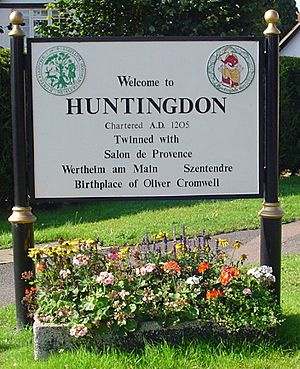 The George Hotel, on the corner of High Street and George Street was once a posting house. It was named after St. George in 1574 and was bought some 25 years later by Henry Cromwell, grandfather of Oliver Cromwell. Charles I made The George his headquarters in 1645. Later Dick Turpin is reputed to have been a visitor when it was a coaching inn on the Great North Road. The mid-19th century saw two wings of the inn burnt down but two were saved including the one with the balcony overlooking the yard. Since 1959 the courtyard and its balcony have been the setting for performances of the plays of William Shakespeare, produced by the Shakespeare at The George Trust.

The town lies on the north bank of the River Great Ouse, opposite Godmanchester and close to the market town of St Ives in the east and the village of Brampton in the west. Huntingdon now incorporates the village of Hartford to the east, and the developing areas of Oxmoor, Stukeley Meadows and Hinchingbrooke to the north and west.

Between Godmanchester, Huntingdon and Brampton lies England's largest meadow, Portholme Meadow. Around 257 acres (1 km²) in size and containing many rare species of grass, flowers and dragonfly, it is the only known habitat of the Marsh Dandelion in Britain. It acts as a natural reservoir for holding water in times of flood enabling the river to run off slowly, thereby helping to prevent flooding of nearby towns. It has also served as a horse race course and once was a centre for aviation. 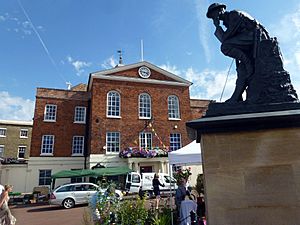 Huntingdon is home to many local businesses, including a local Horseracing Course, Huntingdon Racecourse. Hinchinbrooke Business Park has many offices and warehouses located on it.

As with the rest of the British Isles, Huntingdon experiences a strongly temperate maritime based climate, free from temperature extremes, with rainfall fairly evenly spread throughout the year.

With rainfall at under 550 mm per year, the Huntingdon area is amongst the driest in the UK – 103.4 days on average will record at least 1 mm of rain. All averages mentioned refer to the period 1971–2000.

For the census that was taken in 1961 and also for the census in 1971, Huntingdon was combined with Godmanchester.

The former Literary and Scientific Institute is now Commemoration Hall. 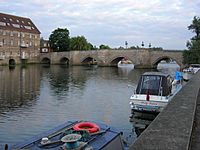 The Old Bridge across the Great Ouse, to Godmanchester.

There are 3 RAF stations within 4 mi (6 km) of the town: RAF Brampton, once home to Headquarters RAF Support Command and now part of the Defence Logistics Organisation (DLO); RAF Wyton, once a major flying station but now also part of the DLO; and RAF Alconbury currently occupied by the United States Air Force.

Part of the medieval infirmary hall of St Johns on the marketplace became Huntingdon Grammar School and was attended by Cromwell and diarist Samuel Pepys. The building is now the Cromwell Museum, run by Cambridgeshire County Council. 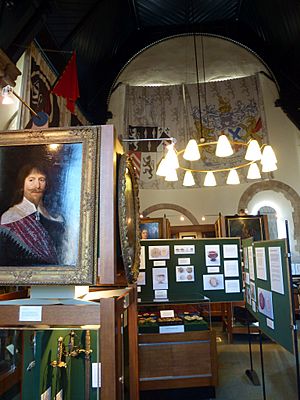 Interior of the Cromwell Museum.

Once a convent, Hinchingbrooke House is said to be haunted. The bridge over the Alconbury Brook named Nun's bridge is said to be also haunted by one of the nuns who once lived at the old convent that is now Hinchingbrooke House. It's said she is often accompanied by another ghost which resembles the appearance of a nurse. The myth goes that the nun had a lover, a monk who caused them to be murdered. In 1965 a married couple reported seeing the ghosts on the bridge, and again when they returned home the same night.

There are direct bus services to Peterborough, St Neots, Ramsey, St Ives and Cambridge, as well as within the town and to Hinchingbrooke Hospital. Most buses are provided by a local company, Go Whippet, or by Stagecoach.

Luton and Stansted airports are within 40 miles (60 km). 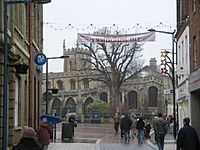 Huntingdon town centre, looking North along the High Street towards All Saints' Church.

Once renowned for many more churches within the town, there are now four Church of England churches in Huntingdon, which together with the churches in the adjacent villages Great and Little Stukeley are members of the Huntingdon Team Ministry in the Diocese of Ely. The four churches are All Saints' (next to the Market Square), St Mary's (opposite Pathfinder House), St Barnabas (on the Oxmoor estate) and All Saints', Hartford.

All content from Kiddle encyclopedia articles (including the article images and facts) can be freely used under Attribution-ShareAlike license, unless stated otherwise. Cite this article:
Huntingdon Facts for Kids. Kiddle Encyclopedia.