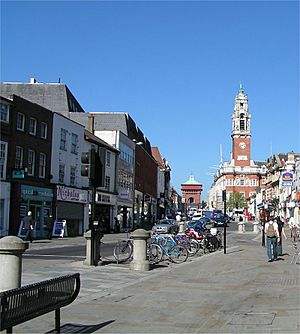 Market town is a word in law that came from the medieval period. It means a settlement in Europe that has the right to have markets. This separates them from villages and cities. A town may be described as a market town or as having market rights even if it does not have a market anymore, provided the right to do so still holds.

All content from Kiddle encyclopedia articles (including the article images and facts) can be freely used under Attribution-ShareAlike license, unless stated otherwise. Cite this article:
Market town Facts for Kids. Kiddle Encyclopedia.