Ivan Konstantinovich Aivazovsky (Russian: Ива́н Константи́нович Айвазо́вский; 29 July 1817 – 2 May 1900) was a Russian Romantic painter who is considered one of the greatest masters of marine art. Baptized as Hovhannes Aivazian, he was born into an Armenian family in the Black Sea port of Feodosia in Crimea and was mostly based there.

Following his education at the Imperial Academy of Arts in Saint Petersburg, Aivazovsky traveled to Europe and lived briefly in Italy in the early 1840s. He then returned to Russia and was appointed the main painter of the Russian Navy. Aivazovsky had close ties with the military and political elite of the Russian Empire and often attended military maneuvers. He was sponsored by the state and was well-regarded during his lifetime. The saying "worthy of Aivazovsky's brush", popularized by Anton Chekhov, was used in Russia for describing something lovely. He remains highly popular in Russia.

One of the most prominent Russian artists of his time, Aivazovsky was also popular outside Russia. He held numerous solo exhibitions in Europe and the United States. During his almost 60-year career, he created around 6,000 paintings, making him one of the most prolific artists of his time. The vast majority of his works are seascapes, but he often depicted battle scenes, Armenian themes, and portraiture. Most of Aivazovsky's works are kept in Russian, Ukrainian and Armenian museums as well as private collections. 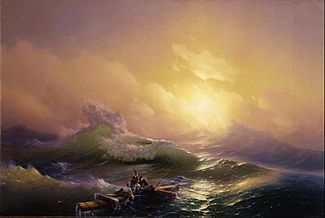 During his 60-year career, Aivazovsky produced around 6,000 paintings of, what one online art magazine describes, "very different value ... there are masterpieces and there are very timid works". However, according to one count as many as 20,000 paintings are attributed to him. The vast majority of Aivazovsky's works depict the sea. He rarely drew dry-landscapes and created only a handful of portraits. According to Rosa Newmarch Aivazovsky "never painted his pictures from nature, always from memory, and far away from the seaboard." Rogachevsky wrote that "His artistic memory was legendary. He was able to reproduce what he had seen only for a very short time, without even drawing preliminary sketches." Bolton praised "his ability to convey the effect of moving water and of reflected sun and moonlight."

Aivazovsky's early works incorporated Armenian themes. The artist's longstanding wish to visit his ancestral homeland was fulfilled in 1868. During his visit to Russian (Eastern) Armenia (roughly corresponding to the modern Republic of Armenia, as opposed to Western Armenia under Ottoman rule), Aivazovsky created paintings of Mount Ararat, the Ararat plain, and Lake Sevan. Although Mt. Ararat has been depicted in paintings of many non-native artists (mostly European travelers), Aivazovsky became the first Armenian artist to illustrate the two-peaked biblical mountain.

Aivazovsky died on 19 April (2 May in New Style) 1900 in Feodosia. In accordance with his wishes, he was buried at the courtyard of St. Sargis Armenian Church. A white marble sarcophagus was made by Italian sculptor L. Biogiolli in 1901. A quote from Movses Khorenatsi's History of Armenia in Classical Armenian is engraved on his tombstone: "He was born a mortal, left an immortal legacy" or "Born as a mortal, left the immortal memory of himself". The Russian inscription beneath reads: "Professor Ivan Konstantinovich Aivazovsky 1817-1900".

After his death, his wife Anna led a generally secluded life and died on July 25, 1944. She was buried next to Aivazovsky.

All content from Kiddle encyclopedia articles (including the article images and facts) can be freely used under Attribution-ShareAlike license, unless stated otherwise. Cite this article:
Ivan Aivazovsky Facts for Kids. Kiddle Encyclopedia.